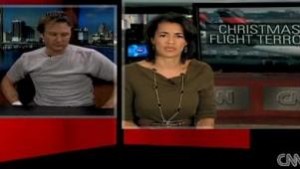 Here is a lesson in how journalism (and really, life) works in 2009: the passenger on Northwest Flight 253 being billed as a hero for helping subdue Umar Farouk Abdulmutallab will tell you his story – but only if you pay him money.

But Jasper Schuringa was already on CNN, you say? Well CNN paid up.

You’ll notice CNN’s eight-minute interview with Schuringa earlier today was a little awkward, especially at the end. Around the five-minute mark, Schuringa looks uncomfortable, saying “but I don’t really want to talk about that,” and “ok, well thank you very much,” while trying to end the interview. Anchor Fredricka Whitfield, continued the questions however, while what sounds like an argument can be heard off-screen.

Here’s what it sounds like happened: CNN tells Mediaite they paid a “licensing fee” for the exclusive cell phone image, which they have been using throughout the day. TVNewser reports, “Insiders tell us other networks are vying to buy the image for upwards of $10,000.”

CNN clarifies the network did not pay for the actual interview during CNN Newsroom. However, there’s a reason Schuringa has not appeared any further on CNN or any other network – we hear he has asked for additional payment for any future interviews.

The practice of paying a “licensing fee” rather than a direct exchange is a way networks who claim to never pay for interviews can get around the issue. By paying for images and video, they are free to say no money was exchanged hands for the actual interview – which is still viewed as unseemly for news outlets not named the National Enquirer or TMZ. But paying for something to secure an interview happens quite a bit.

Earlier this week NBC paid for the chartered jet to bring David Goldman and his son from Brazil back to the United States. And wouldn’t you know it – the exclusive, first interview goes to Meredith Vieira, airing Monday on the Today show.

Clearly what Schuringa did was brave and potentially helped stop further damage caused from the attempted terror attack. But now he wants money to tell his story, while several other passengers are out talking on various cable and broadcast news outlets. Even stranger is who may be arguing, audibly off-screen, on his behalf during the CNN interview. Does he already have a publicist? And where does he show up next?

While network shows like ABC’s 20/20 or NBC’s Dateline often license photos and video for interviews, it’s rare to see CNN get into the mix. Obviously they wanted to land the “get” – but at what cost, literal and figurative?

Here’s the CNN interview with Schuringa: