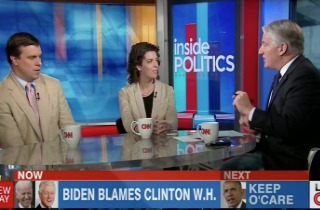 A panel of political analysts on CNN’s New Day on Monday observed that Vice President Joe Biden took a veiled shot at former Secretary of State Hillary Clinton over the weekend by criticizing former President Bill Clinton’s time in office. The political reporters on CNN detected that Biden is behaving like a 2016 candidate, whereas Clinton is not. They further noted that Biden is making some of the same arguments against Clinton that President Barack Obama made during the 2008 Democratic primaries.

Speaking at a Democratic fundraiser on Saturday, Biden told the audience that the divide between the rich and the middle class in America did not begin to expand to the rate it has today in the Bush years but during the Clinton administration.

“This is sort of the case that then Senator Barack Obama made against Hillary Clinton back in ’08,” The Atlantic’s Molly Ball said. “Biden, in public settings, makes the same sort of argument for like the blue-color, economic populist strain.”

She added, however, that Biden would have to defend the Obama administration’s economic record.