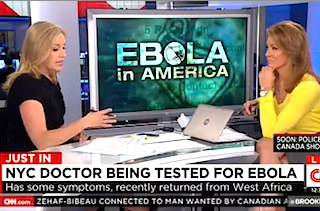 Appearing on CNN this afternoon, correspondent Poppy Harlow reported one truly bizarre detail about the Columbia Presbyterian doctor who recently returned from West Africa and was rushed to New York City’s Bellevue Hospital Thursday to be tested for Ebola.

According to CNN, the man, identified by CBS News as Dr. Craig Spencer, did not self-quarantine after returning from Guinea, where he was working with Doctors Without Borders to treat Ebola patients, and as recently as last night took an Uber car to a bowling alley in Williamsburg, Brooklyn. He apparently did not report having any Ebola-like symptoms until today, when he called 911 to report his high fever and nausea. The results of his Ebola test will not be available for another 12 hours or so, and it’s entirely possible that this is one big false alarm.

And, of course, Twitter could not help but react to the part of the story involving Uber:

Uber, but for Ebola.

Wow the latest competitive tactic from @lyft is really upsetting

NYC Doctor who may have ebola got into an Uber yesterday. This could explain why he didn't check into the hospital until today.

Uber driver trying to retroactively put Ebola doctor down as “one star."

Uber, but for delivering the same uber joke about ebola pic.twitter.com/GEH0qSjnQk

We reviewed our records and were able to confirm that one of our driver partners in New York provided a ride to the patient yesterday evening. We immediately contacted the CDC and NYC Department of Health and Mental Hygiene (NYC DOHMH), which stated that neither our driver partner nor any of his subsequent passengers are at risk. We have communicated this to the driver, and the NYC DOHMH medical team met with the driver in person, assuring him that he is not at risk. Our thoughts are with the patient and his loved ones.