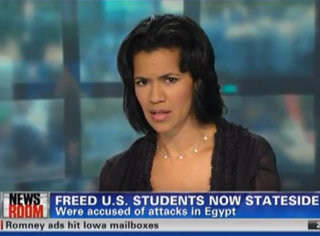 CNN anchor Fredricka Whitfield got a bit of an unwelcome surprise this evening as an interview with who she thought was Gregory Porter, an American student recently arrested and released in Cairo, went awry. Porter described the fear of being arrested in a crowd in Tahrir Square, the happiness of hearing his mother’s voice after his first phone call… and then thanked “the North Shore Animal League and Baba Booey’s monkey nuts.”

“Porter”, who was arrested and released with several friends studying abroad and now back in the United States, told Whitfield being home was “like an early Christmas present” and explained that, while some of the crowd was violent, “we were just down there looking– next thing we knew, we were grabbed by police.” He then thanked his mother, his attorney, the American embassy, the North Shore Animal League, and “Baba Booey’s monkey nuts.” Whitfield approached this by simply continuing the interview stoically, though clearly a bit thrown off. By then, “Porter” had hung up.

CNN hasn’t followed up on the prank, though the network has been pranked several times before and have rarely followed up on air. That said: how does this keep happening? What is the screening process for guests that appears so easy to breach that no one realized the actual Gregory Porter’s attorney or publicist or anyone else handling the student– himself, even– were completely unaware they were about to be interviewed on CNN? Either way, a bizarre and unexpected end to the evening.