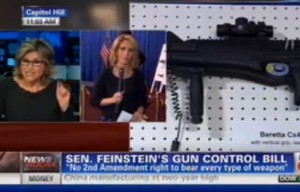 While killing time before Sen. Dianne Feinstein‘s press conference to introduce her new assault weapons ban, CNN’s Ashleigh Banfield focused on what she called the “theatrics” of the event, specifically the display of assault weapons that was set up for the occasion. Banfield noted that, unlike Meet The Press‘ David Gregory, Sen. Feinstein had secured permission to display the weapons, which violate Washington, DC gun laws, but also promoted the false notion that objections to assault weapons have to do with the way the guns look, rather than the way they function.

Banfield brought up the “cosmetic” talking point right away, telling reporter Dana Bash, “Theatrics are often times discussed as part of the problem when discussing the military-style assault weapons in the first place, and there will be no shortage of theatrics, right?”

Bash didn’t address the “problem” of “theatrics,” instead describing the assault weapons display, and noted that “they got special permission from the DC police, and also from the Capitol Police, and there are a lot of Capitol Police officers here,” she replied.

Ms. Banfield took another shot at it, telling Bash, “They look so incredibly menacing, but are they any different that what is legal? Is there a lot of specificity about what kind of weapon will constitute an assault weapon?”

Again, Bash ignored the premise of the first question, and responded to the second, explaining some of the provisions of the bill, but aside from the extended magazines, failed to explain how any of the features of these weapons relate to function, rather than form.

As Dana Bash took her seat to wait the start of the press conference, Banfield turned to reporter Joe Johns. “The good Senator is trying to make a point about what these look like,” she said, ” What critics say is an image issue, as opposed to a capacity issue, but it’s an issue that those who are concerned about this feel is meritorious.”

That’s when the press conference started, leaving viewers with the impression that some say these guns just look scary, and some other people say the “issue is meritorious,” and how can we possibly know the truth?

If you’re afraid people will call you “biased” if you explain the function of a pistol grip on an assault weapon, then don’t bring up what “critics say,” and if you’re too afraid to speak the truth with your own mouth, stick a “some say” in front of it. I would suggest CNN reach back through the mists of time, and let a young (or should I say younger) Dan Abrams explain the functional characteristics of an assault weapon:

Seven features were considered in determining military appearance: (1) large capacity magazines that enable the weapon to shoot more rounds without reloading; (2) folding stocks, which provide better concealability and portability and which are not generally present on traditional sporting rifles; (3) pistol grips, which enhance control when firing with one hand, a maneuver not generally used in hunting; (4) flash suppressors, which conceal the shooter’s location; (5) bipods for stability; (6) capacity to accept bayonets or grenade launchers; and (7) night sights (since nighttime hunting is generally illegal). [32] The Working Group also examined whether the weapons originally had been, or could easily be transformed into, fully automatic weapons. In general, guns that were originally fully automatic were suspected of having been transformed into semiautomatics solely to evade import laws and thus were classified as “military” in nature. Meanwhile, to help identify a weapon’s overall sporting purpose, the Working Group examined advertisements and articles about the weapons and sent out questionnaires to experts, magazines, and shooting clubs. [33]

Using these criteria, the BATF classified forty-three weapons as assault weapons. In so doing, it established a non-arbitrary method for distinguishing assault weapons from other semiautomatic weapons.

Or, you could just keep saying “Dianne Feinstein wants to grab your scary-looking gun.”

While Sen. Feinstein’s ban goes further than the 1994 assault weapons ban, critics of the law are correct in noting that a feature-based test leaves the measure vulnerable to gun-biz chicanery. That same Young Dan Abrams had a handle on a much more rational approach:

The most effective approach would be to shift the burden to hunters and shooting clubs to demonstrate that a semiautomatic weapon’s utility outweighs its potential danger. Only after a gun’s advocates demonstrate that the weapon should be legal would the sale or possession of that weapon be permitted. [Page 500]

Unlike the current system, which forces legislators to prove that a particular weapon is especially threatening, under this new approach possession of certain semiautomatic weapons would be treated as a “privilege,” not as a “right.” [70] There is precedent for such a system: the current New Jersey law, for example, exempts assault weapons that the Attorney General determines “[are] used for legitimate target shooting purposes.” [71] Licenses should be granted only for those weapons that are particularly suited to hunting or some other valid purpose, and only to individuals who have passed a background check. This would allow “honest citizens” the privilege of owning a hunting weapon, and possibly, a licensed handgun for self-defense.

A federal law could be modeled after Maryland’s handgun law, which only permits the sale of handguns that have a legitimate sporting, self-defense, or law enforcement purpose. [72] In Maryland, “a person may not manufacture for distribution or sale any handgun that is not included on the handgun roster in the State.” [73] The Governor appoints a nine member “Roster Board” comprising state officials, at large citizen members, a handgun professional, an N.R.A. representative, and a gun control representative. [74] The board determines which weapons should be sold by considering concealability, ballistic accuracy, weight, quality of materials, quality of manufacture, reliability as to safety, caliber, detectability, as well as any legitimate sporting, self-defense or law enforcement utilities the guns might have. [75] The law further provides that, “a person who petitions for placement of a handgun on the handgun roster shall bear the burden of proof that the handgun should be placed on the roster.” [76] The board either approves or denies the petition within forty-five days. Hearings are available after the denial of a petition. [77]

The measure that Sen. Feinstein introduced today also seems to have a weaker grandfather clause than she originally envisioned, but again, is still a vast improvement over the 1994 ban, which, at the time of its expiration in 2004, enjoyed 70% support among Republicans. Whether or not this law passes, hopefully Rep. Carolyn McCarthy is right when she says “This is only the beginning.”

A good part of that beginning would be for journalists to tell the truth about assault weapons, rather than repeating NRA lies.