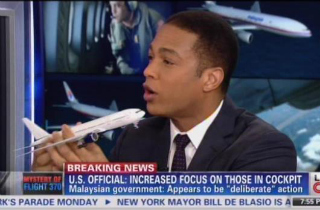 The CNN daycare unit played a game of show-and-tell-nothing Saturday in yet another example of cartoonish crisis coverage.

The Newsroom passed around a toy plane as prop for flight MH370 as its analysts worked through possible hypotheses — otherwise known as Breaking News make-believe — concerning the disappearance of the mysterious Boeing 777 that carried 239 very real and very missing people.

The gimmick was likely conceived from the idea that channel-surfers would come across CNN playing with toys and stop, thinking, “Huh, wonder what they are talking about.”

Of course, the Twitterverse took notice:

Short of Anderson Cooper reporting live from a saltwater tub, the pursuit of truth in the missing airliner has felt more “Zoinks! Like, hey Scoob,” than tactful and/or pressing investigative journalism.

And though CNN has yet to send Wolf Blitzer out for a game of Indian Ocean “Marco Polo,” the reality is, with CNN producers desperate to cover MH370 over Crimea, overtime wages, and healthcare.gov, viewers will tune into shenanigans aplenty from a CNN mystery machine that has only managed to uncover ratings gold with, as Don Lemon put it, “your Saturday night mystery.”

“Let’s not indulge in this ourselves.” Too late, Howard Kurtz — CNN just invited you over for a sleepover.

Whether it is CNN’s games of hide-and-seek, or Fox News’s “I-know-you-are-but-what-am-I,” the coverage of MH370 is anything but model coverage.

Turn it off, and play with your actual kids until we find out some hard news about the missing plane.

Or you can watch Lemon’s toy plane segment below, via CNN: