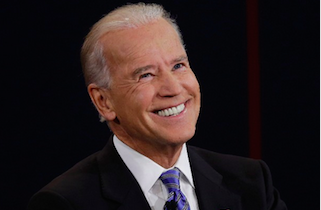 Vice President Joe Biden has made no new indications that he intends to enter the 2016 presidential race, but CNN has a spot waiting for him in the first Democratic primary debate just in case.

In announcing its criteria to participate in the upcoming debate on October 13 in Las Vegas, Nevada, CNN revealed that it would allow Biden to announce his run as late as the day of the debate and still make it onto the stage with the rest of the candidates. That would be one way to guarantee an outsized amount of attention at the event.

As of now, CNN has five candidates scheduled to appear in next month’s debate: Hillary Clinton, Bernie Sanders, Martin O’Malley, Lincoln Chafee and Jim Webb, each of whom has polled over an average of 1% in three national polls released since August 1st. Biden is polling well above the bottom three names on that list, currently sitting at 20% on Real Clear Politics’ average, behind Clinton (40.8%) and Sanders (27.6%).

So, as long as Biden files his FEC paperwork before the 9 p.m. ET start time of the CNN debate on October 13, CNN will welcome him onto the stage at the Wynn Hotel with open arms, eager for the increased interest he would no doubt bring to a debate that is missing a Donald Trump-sized figure who can draw record ratings.