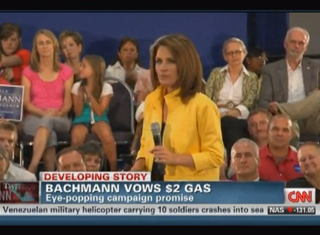 Rep. Michele Bachmann has made a number of promises on the campaign trail that have raised the eyebrows of her detractors, but tonight on The Situation Room one promise was torn apart for having what they contended to be no basis whatsoever. Rep. Bachmann told a crowd on the campaign trail she could promise $2/gallon gasoline as president– a claim that, according to Joe Johns, was “completely fact-free.”

Johns went through Bachmann’s comments and followed up with experts explaining how gas prices work– they are set internationally, with the president having very little to do with it. Both President Obama and President Bush made statements explaining that they had no say in the matter, with the international oil community working among themselves.

As for how prices can drop to that specific price Rep. Bachmann promised, Johns noted somewhat wryly that “about the only way for the price of gas to drop to $2 is for the entire global economy to tank”– something that could happen with the influence of an American president, but doesn’t really make for an appealing campaign talking point. Johns turned then to CNN financial reporter Ali Velshi, who emphatically attacked the promise as an “entirely irrational, baseless claim, not doable.” If it did happen, he added, “the most likely way to do that is a global depression.”

Whether Rep. Bachmann will respond or continue the use the claim remains to be seen, but this report does a pretty good job of dismantling the promise as either false or incredibly dire. The segment via CNN below: