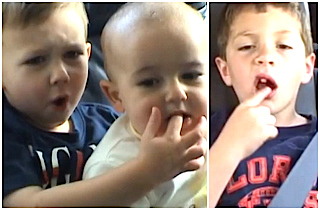 On Thursday, the White House announced that in the days following next week’s State of the Union address, President Barack Obama will sit down with three major YouTube celebrities — Bethany Mota, GloZell Green and Hank Green — for live Q&A sessions to be broadcast on that platform.

So, when it was time for CNN’s Jim Acosta to question White House Press Secretary Josh Earnest about the decision at today’s briefing, he took this approach: “Just noticing that these folks who are going to be conducting these interviews are not professional journalists, they’re people who post videos on YouTube, and I’m just curious, was ‘Charlie Bit My Finger’ or ‘David After Dentist’ not available?”

To the shock of those in attendance and watching on TV, Earnest said he’s “not familiar” with two of the most popular YouTube videos of all time.

When Acosta shifted gears and asked Earnest if this was the White House’s way of trying to “jazz up” the dying medium of the State of the Union address, the press secretary noted that he was award of a column that CNN reporter had written on the subject this week titled, “Don’t tell White House State of the Union ain’t what it used to be … they know!”

Earnest said these new YouTube interviews are just a “variation on a theme” of the Google Hangout events Obama has done in the past and won’t “take the place of news conference the president will convene with all of you tomorrow.”

And here the videos Acosta reference in case Earnest has a few minutes to catch up on what he missed: