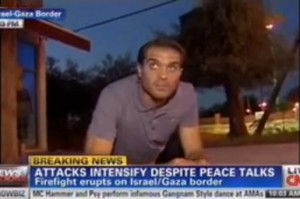 CNN’s boots-on-the-ground coverage of the violence in and around Gaza City has yielded some dramatic, if possibly flawed, results. The network dispatched marquee talents Wolf Blitzer and Anderson Cooper to the region late Sunday, to round out a complement of ten CNN reporters in the region. During a live shot Sunday night, Anderson Cooper was startled by a nearby explosion in Gaza City, but continued his reporting largely unfazed. On Monday morning, foreign correspondent Frederik Pleitgen was forced to calmly hit the deck in the middle of his report to CNN Newsroom anchor Carol Costello when an incoming Hamas missile triggered an alarm.

Reporting from the Israeli town of Ofakim, near the border with Gaza, Pleitgen told Costello, “This is a town that’s been hit by a lot of rockets in the last couple days. They have had rocket sirens go off earlier today. Really this entire region has had a lot of rockets coming in, especially in the past couple hours.”

Pleitgen and his cameraman then calmly moved left a few feet, and flattened themselves to the ground as Pleitgen continued reporting. “There’s no place to go,” he said. “What you have to do is get down on the ground and wait for it to pass. Just hope it doesn’t hit anywhere here.”

Once the alarm was past, an alarmed Carol Costello said, “We are still there and we’re nervous, Fred. you’re not even wearing any protection. Are you okay?”

“We’re fine,” he replied, adding “it seems as though the impact was quite a ways in the distance, I would say a couple miles probably in the distance. There over in the sky, you probably won’t be able to see it there, there’s an interceptor missile taking off. That’s the iron dome interceptor.”

Pleitgen was referring to the Iron Dome missile defense system, which went into operation in 2011, and has been remarkably effective. “We keep hearing 1,000 rockets launched out of Gaza, and only about 300 picked off,” Pleitgen said, “but the Iron Dome is actually amazing in that it only picks off missiles that hit populated areas. If it tracks a missile that’s going to hit a field, it’s not going to pick it off. That’s most of the missiles that are happening. so most of the rockets that are going to hit population centers are actually picked off by the Iron Dome.”

While the value of reporting like this may not be readily apparent, and even seem a bit like showboating, there is an immediacy to it that tells a story that’s otherwise difficult to convey. “This town here on the border is one that does take a lot of fire very frequently,” Pleitgen said in his report, “so this is really something that is very commonplace for the people here. They have sort of an eerie daily routine with this.”