CNN Reporter On The Scene In Watertown Reports ‘Interesting… That Dog Is Barking!’ 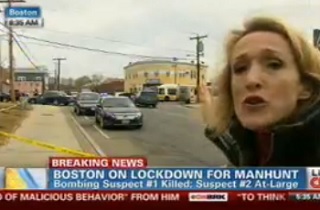 Whoever said “Dying is easy, comedy is hard” was obviously not a television news reporter, where you have an even chance to do either. As police close in on at-large Boston Marathon bombing suspect Dzhokhar A. Tsarnaev, CNN reporter on the scene in Watertown Deborah Feyerick suddenly found herself at the edge of frenetic police activity, and found herself in the unenviable position of having a lot to report on, and not much to actually report.

As police vehicles rushed down the street, Feyerick frantically called an audible to the control room, reported smelling smoke, adding “Something just happened. We don’t know what it is.”

Then, in a moment worthy of Jon Stewart’s Moment of Zen, an understandably excited Feyerick reported “We smell smoke, people running to the center, cars going straight, cars turning to the right. Whether they cordoned off this block, we can see a helicopter that is up in the air. Something has just happened. Police officers are running, we have a dog, a dog that’s on its way. Interesting, that dog is barking. Whether that’s a canine, we don’t know.”

A few moments later, a policeman orders Feyerick across the street, and she has the presence of mind to ask him what’s going on. “I don’t know, but I need you across the street to keep you safe,” the offecer responds. “That’s what I’m doing. Can you please go across the street?”

But then, as the police are deploying quickly behind her, and she’s trying to get out of harm’s way, Feyerick makes the curious decision to start reading things from the suspect’s web page, off of a laptop she’s carrying. It was like watching a Hindenburg reporter hunched over a radio.

Thankfully, no one at the scene was hurt, and as of this writing, Dzhokhar A. Tsarnaev is still at large, but this clip is a great example of just how surreal modern television news reporting can be.