CNN Reporter To Fmr. Secretary Of Defense: ‘How Important Is Egypt To The U.S.?’ 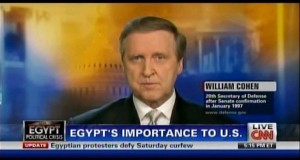 Trying to figure out how the United States will approach the Egyptian uprisings diplomatically is complicated for a number of reasons, not the least of which that current leader Hosni Mubarak is an American ally. To help explain the background on the issue, CNN invited on Former Secretary of Defense William Cohen, but kept it quite basic– namely, they asked him to explain why the United States should care about Egypt at all.

CNN anchor Don Lemon was joined today by fellow anchor John Vause to chat with Cohen, and the latter opened up the conversation with a rather open-ended query: “How important is Egypt to the United States?” Cohen took it slow and began to explain the relative peace between Egypt and Israel, the nation’s place “in the forefront of trying to stop the weapons coming into Gaza,” its pivotal stance on Iran, and other essential positions that make it a place worth being involved in. He also answered that it was clear to him that Mubarak’s actions at the moment “surely [won’t] satisfy those people in the streets” protesting, and upon further questioning of how bad things could get if the Muslim Brotherhood take over, Cohen noted that it is Israel in particular that would have to be “very concerned.”

As for who can keep the place stable, Cohen noted that it was the military that had the most chance of controlling the masses, and that, should they side with Mubarak, “that will change the dynamic on the ground.” He also noted that, somewhat counterintuitively, “the military is playing it quite cool, and that may be the calming effect they seek to achieve.”