CNN Reporter Who Found Benghazi Suspect Last Year: ‘Not a Man Who Was in Hiding’
VIDEO

CNN Reporter Who Found Benghazi Suspect Last Year: ‘Not a Man Who Was in Hiding’ 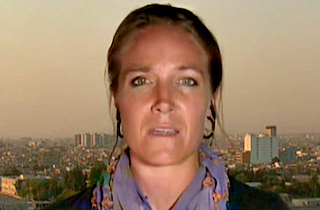 Following news that U.S. special forces had apprehended Ahmed Abu Khattala, a prime suspect in the 2012 Benghazi attack, in a secret raid over the weekend, CNN talked to reporter Arwa Damon, who had previously located Khattala and even interviewed him, to ask why she had been able to find him but not the U.S. investigative teams and military.

Damon interviewed Khattala one year ago, and said he did not act like a man being wanted for a terrorist attack, and was even willing to talk to U.S. investigators. When CNN host John Berman asked what “explained the gap” between her ability to find him and the government’s year-long search, Damon cited “a number of factors.”

“After the attack on the U.S. consulate and then the CIA shutting down its annex after the attack, the U.S. did not have the reach into Libya and Benghazi it needed perhaps to pick him up,” Damon said. “Also playing into all of this is the sensitive nature of Libyan politics. Picking him up is going to inflame the situation here. But again, this was not a man who was in hiding. I was the first television correspondent to speak to him but he had spoken to one or two other print outlets beforehand. He did not feel the need to secure himself other than with this small unit of Libyan forces that were part of one of Islamist militias there.”

“I don’t know if he went into hiding afterwards,” Damon continued. “He was certainly not someone we were able to reach after. I have tried to contact him — I have his phone number — afterwards on a couple of occasions. It would just ring. …I’m not sure what he’s been doing for the last year at this stage. We’re working sources trying to get more information about this.”