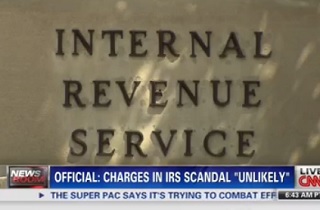 Even as some in the media draw comparisons between the roiling Bridgegate scandal and the allegations of political targeting by the IRS, CNN reports that no criminal charges are likely to be filed against anyone involved in what they still call the “IRS Scandal.” CNN’s Carol Costello interviewed reporter Joe Johns, who noted that it was “hard to prove it wasn’t just reasonable behavior by a government agency,” and that “it’s pretty clear some progressive groups were targeted as well.”

“We can say, at this point, no charges may be filed,” Johns said. “Sources have told CNN criminal charges are not likely, but we’ve got no indication the investigation is over.”

“This news may sound surprising but making a criminal case out of IRS targeting was always a stretch, according to legal experts,” Johns continued. “They look for false statements or perjury, but those charges only stick if someone is found to have intentionally lied to investigators or under oath. They could’ve looked at alleged violation of civil rights or discriminatory conduct, but then you have to show only conservative groups were targeted. it’s pretty clear some progressive groups were targeted as well.”

Johns concluded by noting that “there are people on Capitol Hill who were outraged and have been demanding charges. We’re not likely to have heard the end of this,Carol.”

He later added that “This was a huge political controversy. The question is whether you can make a case, and prove it in a federal court of law? Those are different things. So far we’re hearing charges are not likely.”

When news of the IRS allegations broke last year, it became part of a conflagration of possible scandals for the Obama administration, but as time wore on, the facts caught up to the initial heat around the story. Despite implicit and explicit claims by mainstream reporters, no link was ever established between the conduct of the IRS and any outside entity, and as Johns noted, it was later revealed that liberal groups were targeted for additional scrutiny, as well. In fact, while not a single conservative group was denied tax-exempt status as a result of the added scrutiny, at least one Democratic-leaning organization was.

In June, prior to the revelation that liberal groups had also been targeted, Senate Minority Mitch McConnell (R-KY) conceded that there was nothing to link anyone at the White House with the IRS allegations.