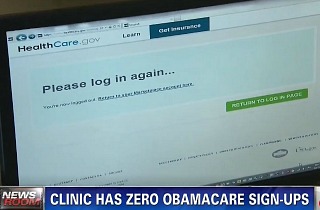 CNN investigative reporter Drew Griffin traveled to Milwaukee to see how two low-income health care clinics were adjusting to the new regulations associated with the Affordable Care Act. What he found was a series of disturbing revelations that could frustrate health care consumers and ACA supporters alike.

Griffin profiled the Progressive Community Health Centers which operates two clinics in Milwaukee, Wisconsin’s poorest neighborhoods. He reported that locals have been taking advantage of those clinics’ “almost free health care” for years. But the administrators and health care professionals who operate those clinics say that may be changing.

“The staff went through months of special training prepared for the official roll-out on October 1,” Griffin reported after noting that the clinic’s care specialists were “excited” for the ACA. However, they have been unable to enroll a single individual in the new insurance exchanges.

“The next step is going to be to actually pick your plan, but we can’t quite get to that part of the site yet,” said PCHC’s CEO, Jenni Sevenich.

“Since October 1, [outreach enrollment coordinator Tina] Chang and her other colleagues have helped 150 people sign up for Medicaid,” Griffin reports, “but not one under a health plan sponsored by the Affordable Care Act.”

Worse, the costs associated with the new plans are prohibitive for the clinics’ patients who are not used to paying anything at all for health care. “It’s not clear just yet if any premium under the Affordable Care Act will be deemed affordable at all to the lowest income consumers,” Griffin added. “Even with a big subsidy from the government.”

“They’re not used to paying an insurance premium,” Sevenich conceded.

The report concludes by noting that all the PCHC’s staffers and practitioners have faith that the law’s implementation will improve.