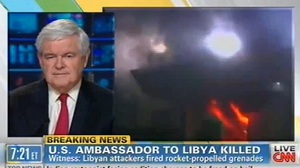 On CNN’s Starting Point Wednesday morning, anchors Brooke Baldwin and John Berman interviewed former Speaker of the House Newt Gingrich about the unrest in Libya and Egypt this week, and while they came armed with the facts, they failed to get Gingrich to address the lies that he and Republican presidential candidate Mitt Romney have told in an effort to politicize the tragedy. Romney slammed the administration over a statement issued by the U.S. Embassy in Cairo before the violence began, and Gingrich tried to lie in his defense.

This morning, it was reported that U.S. Ambassador to Libya Chris Stevens was killed, along with three other consulate employees, in a rocket-propelled grenade attack, following violent protests in Egypt and Libya over a film by an obscure American filmmaker that offended Muslims with an unflattering depiction of the prophet Muhammad. Earlier Tuesday, the protests claimed the life of another U.S. consular employee, who was shot and killed.

The “first response”that Romney was referring to was not from the Obama administration, and wasn’t actually a response to the violence. It was a statement by the U.S. Embassy in Cairo that was published before the violence began:

The Embassy of the United States in Cairo condemns the continuing efforts by misguided individuals to hurt the religious feelings of Muslims – as we condemn efforts to offend believers of all religions. Today, the 11th anniversary of the September 11, 2001 terrorist attacks on the United States, Americans are honoring our patriots and those who serve our nation as the fitting response to the enemies of democracy. Respect for religious beliefs is a cornerstone of American democracy. We firmly reject the actions by those who abuse the universal right of free speech to hurt the religious beliefs of others

So, Mitt Romney is a despicable liar, and as The Huffington Post reports, an eager one, at that:

The campaign had initially planned to hold the statement until after midnight — and the end of the eleventh anniversary of September 11th — but lifted the embargo an hour and a half early as the controversy flared over a series of attacks against the U.S. Embassy in Cairo and the American Consulate in Benghazi, Libya.

President Obama released the following statement this morning: (via email from The White House)

I strongly condemn the outrageous attack on our diplomatic facility in Benghazi, which took the lives of four Americans, including Ambassador Chris Stevens. Right now, the American people have the families of those we lost in our thoughts and prayers. They exemplified America’s commitment to freedom, justice, and partnership with nations and people around the globe, and stand in stark contrast to those who callously took their lives.

I have directed my Administration to provide all necessary resources to support the security of our personnel in Libya, and to increase security at our diplomatic posts around the globe. While the United States rejects efforts to denigrate the religious beliefs of others, we must all unequivocally oppose the kind of senseless violence that took the lives of these public servants.

On a personal note, Chris was a courageous and exemplary representative of the United States. Throughout the Libyan revolution, he selflessly served our country and the Libyan people at our mission in Benghazi. As Ambassador in Tripoli, he has supported Libya’s transition to democracy. His legacy will endure wherever human beings reach for liberty and justice. I am profoundly grateful for his service to my Administration, and deeply saddened by this loss.

The brave Americans we lost represent the extraordinary service and sacrifices that our civilians make every day around the globe. As we stand united with their families, let us now redouble our own efforts to carry their work forward.

CNN’s Brooke Baldwin and John Berman did an excellent job of keeping the facts straight as they interviewed former Speaker Gingrich on the subject, no mean feat given Gingrich’s comical contempt for facts. Early in the interview, Gingrich opined that the protests in Libya and Egypt were the result of “collusion and a fair amount of planning,” which may or may not turn out to be true, but which there is no evidence of. When Berman asked the Speaker “Do you have any proof that there is a connection right now?” Gingrich prefaced his response with a long, derisive laugh that tells you everything you need to know about the former Speaker and Romney surrogate’s regard for facts.

“Look, I don’t have access to the NSA listening devices,” Gingrich responded.

He went on to ask how the U.S. government could “apologize for a film no one has seen, which is what the embassy in Cairo did yesterday. This is part of a much longer struggle, and I think you have to connect these larger dots. It’s not just about an event in Libya, it’s about a longer war, part of which we were being reminded of yesterday on 9/11.”

Brooke Baldwin then asked Gingrich to respond to an Obama campaign statement condemning Governor Romney’s politicization of the violence. “I want to begin with Mitt Romney’s statement on what happened,”she said, then read the statement, which included a reference to the consulate worker who was slain earlier Tuesday. “Now, to be clear,”she added, “the embassy statement from Cairo (that Romney was referring to) actually came out before the protests. They came out after they knew about the film, before the protest, to be clear about that… The Obama campaign response was this. ‘We are shocked, at a time when the United States of America is confronting the tragic death of one of our diplomatic officers in Libya, Governor Romney would choose to launch a political attack. Speaker Gingrich, is this really”the time for politics here?”

“Well, first of all,” Gingrich smugly began, “if you want to do timelines, Governor Romney issued that statement before we knew the American Ambassador was killed,” an irrelevant fact, since Romney mentioned the death of another diplomatic employee in his statement. When Gingrich then accused the Obama campaign of “twisting the facts,” Baldwin tried to correct him.

“How was the Obama campaign twisting the facts?”she asked.

“They were suggesting he was issuing a statement at a time when the Ambassador had been killed, when it was clear Governor Romney didn’t know he had been killed when he issued the statement.” Gingrich responded.

“We knew of a death,” Baldwin interjected.

Gingrich went on to make the false attack on President Obama again (with a side order of implicit racism), saying “Maybe it’s because I’m a conservative. Maybe it’s because I come out of a different background, but when the American flag is torn down and destroyed, when an American ambassador and three other Americans are killed, my reaction is not to find some way to be pleasant and understanding and caring about the people who are killing Americans, tearing down our flag, and assaulting our country…”

Baldwin and Berman deserve some credit for keeping the facts straight (only some credit; they are, after all, newscasters), but the first question shouldn’t have been Ïs this time for politics,” it should have been “Is this the time for Governor Romney to be lying,” and the correct response to Newt Gingrich’s attempt to lie Romney’s way out of it should not have been to behave as though they were pointing out a soup stain on his tie. Journalists have got to become better at making politicians pay at least some price for lying, beginning with actually calling their lies “lies.”