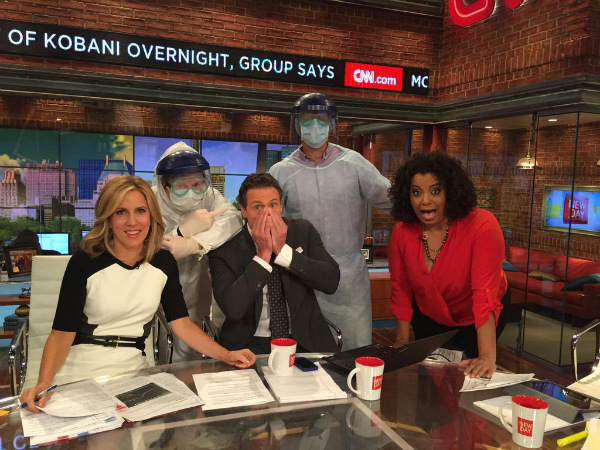 Yes, that is a photograph of anchors pretending to be scared about something, while two men dressed in medical gowns stand over them (one of whom is pointing a finger into Cuomo’s neck for some reason?). Griffin deleted it rather promptly, but Inside Cable News grabbed the image for posterity.

The photograph seems especially tone-deaf, given the criticism of cable news as feeding hysteria over Ebola. Twitter users felt the same way:

Mediaite has learned from a source that Griffin took the picture, but then CNN brass immediately asked him to delete it.

UPDATE — 1:05 p.m. ET: A reader points us to this other Griffin photograph, which doesn’t exactly reflect well upon his judgement either, eh?

AMAZING gown demo from @drsanjaygupta— that might as WELL be called, "we're all f*cked." #fearthechocolatesauce
pic.twitter.com/g2tZAXkJi5