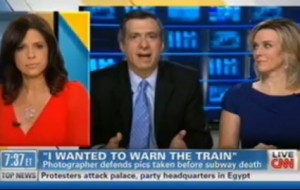 The New York Post‘s decision to publish a photo, by freelance photographer, Umar Abbasi, of the moment before a subway train fatally struck 58-year-old Ki Suk Han on Monday has turned a local tragedy into a national outrage. On CNN’s Starting Point Wednesday morning, The Daily Beast‘s Howard Kurtz and Daily Download Editor in Chief Lauren Ashburn decried the publication of the photo as “sensational, stomach-churning,” and “profit motive journalism at its worst,” but Ashburn took a weird turn when she asked Would The Post have published this if it were a white woman?”

Host Soledad O’Brien led a discussion of the incident that included criticism of the photographer for even taking the picture, rather than helping Mr. Han, and noted that Umar Abassi has explained that he had no time to help the man, other than to alert the train’s driver with his camera flash.

While Kurtz allowed that it might be “a little unfair” to blame Mr. Abassi for not rescuing the man, “what’s not unfair,” Kurtz said, “is to look at the decision to take this picture, and publish it. look, this picture is cheap, it’s sensational, it’s stomach churning, but it’s also news. this is what tabloids do. They exploit tragedy, wringing the emotion from it, and the reason we’re gripped and horrified by it, it’s precisely because it is news.”

Ashburn said the publication of the photo was “insensitive, it’s inappropriate, it’s sickening, rubbernecking,” but added, “Howie, with all due respect, as the ‘dean of the media,’ I completely disagree. Would The Post have published this if it were a white woman?”

Soledad quickly replied, “I think they would have, yes. they would have,” adding “What’s shocking about that has nothing to with the race or gender of the individual. They would have — I mean, the fact that the train is in the same shot as a human being, and by extrapolation we know he’s about to die, which is horrifying, that’s why it’s published.”

Ashburn then said “It’s profit motive journalism at its worst,” to which Kurtz added “No question, The Post is trying to sell newspapers on the stands. Here’s my question, if this photograph is so over the pale and so horrifying and so unfit for human consumption, why is it on every website, why has CNN shown it five or six times in the last hour?”

Perhaps unwittingly, Ashburn answered Howie’s question when she rhetorically asked “What is the public good in seeing this picture?”

While Kurtz seemed to allow that the photo had some news value by virtue of its visceral appeal to common anxieties, he concluded, “Would I have made the decision, as the editor of The Post, to publish this? No.”

The problem is not the decision to take the photo, or even to publish it. The history of journalism is replete with indelible life-and-death images that have become icons of the craft, any one of which could easily have been New York Post-ified: 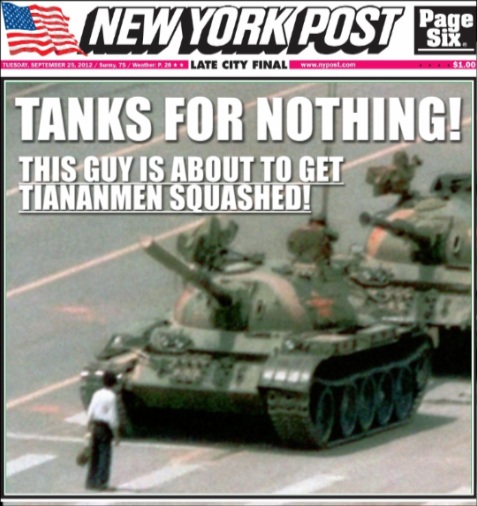 Such treatment would not have diminished the intrinsic power of these images, not in the long run. In much the same way, The New York Post deserves scorn for its treatment of the subway photograph, but ironically, that very flaw may end up serving journalism’s duty to the public good.

The photo itself is powerful, and packs an emotional wallop that Kurtz correctly identifies, but it also has the potential to do some real good. At a basic level, anyone who sees this picture is bound to be more cautious around trains, and maybe more alert to risks to fellow riders, as well. Anyone who grew up in the New York area in the 70s remembers the terrifying subway PSAs that were devoted to just that purpose, and which ended with a scene almost exactly like this photograph.

More than that, though, the attention this story has garnered from this photo could lead to improvements in subway safety, which could, in turn save lives. The Post’s crass handling of the photograph has made it a national news story, where responsible journalists can put that notoriety to good use.