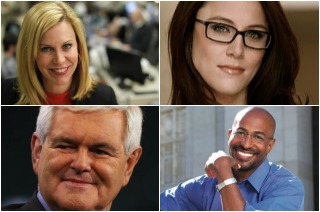 The show will premiere this fall (the network did not specify during which time slot). “Crossfire will be the forum where America holds its great debates,” CNN President Jeff Zucker said — with Cutter and Jones on the left side of the spectrum, and Cupp (who will remain as a contributor to TheBlaze) and Gingrich on the right.

“Few programs in the history of CNN have had the kind of impact on political discourse that Crossfire did – it was a terrific program then, and we believe the time is right to bring it back and do it again,” said Jeff Zucker, President of CNN Worldwide. “We look forward to the opportunity to host passionate conversation from all sides of the political spectrum. Crossfire will be the forum where America holds its great debates.”

In addition, all four hosts will appear across the network’s programming and its special coverage surrounding elections and political events.

“Following the successful launches of Around the World, The Lead with Jake Tapper, and New Day, we felt it was the right time to turn our attention next to Crossfire,” said Ken Jautz, Executive Vice President of CNN. “This will be the next step in reinvigorating our lineup of live programs.”