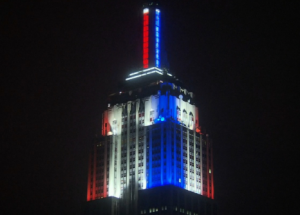 CNN has a prime piece of New York real estate on election night. The network will be displaying election results in real-time on the top of the Empire State Building.

The top of the building will feature two vertical bars, red and blue for Mitt Romney and President Obama respectively. As states’ results are projected, bars will light up, showing a comparison of the candidates’ electoral votes. POLITICO’s Dylan Byers notes that CNN tested the system on Friday night at 3 a.m., which seems to have gone unnoticed.

CNN will join forces Tuesday evening with the Empire State Building to display to New Yorkers and the network’s viewers in the United States and around the world the results of the presidential election. As each state is projected by CNN and electoral votes are allocated to the candidates, a vertical LED-illuminated “meter” located atop the spire of the building will display CNN’s running tally of the race to 270.

This occasion will mark the iconic Empire State Building’s first-ever use of their new custom LED panel technology, a state-of-the-art dynamic lighting system from Philips Color Kinetics that is unique to the Empire State Building and will allow the building’s façade and mast to change lighting scenes in real-time. The four-sided tower, which sits atop the building more than a quarter of a mile from the streets of Manhattan, will be illuminated in patriotic red, white and blue vertical stripes, while the mast will be lit in blue and in red on two sides each to represent President Obama and Gov. Romney’s respective electoral vote totals. CNN, which will exclusively shoot footage from the rooftop of a neighboring building, will air live images of the illuminated tower as the evening’s results progress. When CNN projects a winner of the presidential election, the tower lights of the Empire State Building will change color to all-blue or to all-red.