CNN Tortures Correspondent by Making Her Report Hourly on a Riverbank in -15° Weather
WHY? 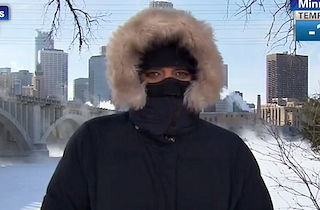 Boasting that they had sent a “California girl” to the depths of the polar vortex on Monday, CNN repeatedly made correspondent Stephanie Elam trudge onto the banks of the Mississippi River in Minneapolis—current temperature -18° F with a windchill of -44° F — to report first-hand on the “historic and life threatening” cold enveloping the central states.

Bracketed by chyron alarms of “dangerous conditions” and warnings from authorities not to go outdoors unless it was absolutely necessary, the Los Angeles-based Elam bundled up at noon to report that:

Watch a mashup of Elam’s segments, and pray for her: