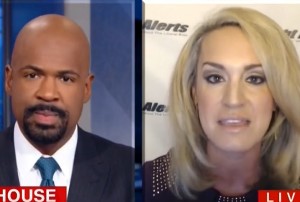 Professional CNN Trump Fan Scottie Nell Hughes took to the cable news network’s air Sunday morning to try and promote the Donald Trump campaign’s defensive action against the flak they’ve been getting over Trump’s remarks about the parents of the late Captain Humayun Khan, a Muslim soldier who was killed in Iraq.

Armed with the transcript that the Trump campaign released overnight, Hughes tried to claim that This Week host George Stephanopoulos tried to “trap” Trump into a bad answer by asking a question more than once, and also claimed that Trump had praised Captain Khan and his family elsewhere in the interview.

Unfortunately for Hughes, New Day Sunday anchor Victor Blackwell also has internet access, and had the same transcript Hughes had:

Blackwell: they say what would you say to that father? trump says, well, i’d say we have a lot of problems with radical islamic terrorism. why not in that moment say, i’m sorry for this family’s loss and we honor his service?

Hughes: Because he said that earlier in the interview. What i’m talking about is farther on down the transcript. When stephanopoulos continues to push for an answer because it’s obvious that his ulterior motive was to trap Donald Trump. Right now the Democrats have a major issue with the military vote as their general was booed and harassed on the stage of the DNC this week. This is a hit job done on Mr. Trump.

Blackwell: You say earlier in this interview that he expressed that gratitude and sympathy for the family. This is the transcript from the Trump campaign. I don’t see it there.

Neither will you. But what does it matter? Hughes gets paid either way, by CNN. Maybe someone should ask them how that is a service to their viewers.