CNN Utterly Fails At Calling Paul Ryan A Liar, Or Caring That He Is One
video

CNN Utterly Fails At Calling Paul Ryan A Liar, Or Caring That He Is One 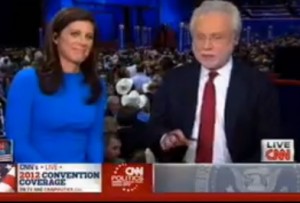 In the current cable news landscape, CNN has carved out a space as the “down-the-middle” network, and that brand depends heavily on trust. Their tepid handling of vice-presidential candidate Paul Ryan‘s acceptance speech at the Republican National Convention Wednesday night damaged that trust, but in the moments following the speech, anchors Wolf Blitzer and Erin Burnett seemed to indicate that trust doesn’t matter all that much.

Josh Marshall from TPM flagged an exchange between Blitzer and Burnett that he dubbed “Great Moments In CNN Euphemisms,” but their crime is far worse than simply refusing to call Ryan a liar. Their commentary seems to indicate that it doesn’t matter if Ryan is a liar. Blitzer begins by calling it “a powerful speech,” then notes, in the same breath, that “I marked at least seven or eight points I’m sure the fact checkers will have some opportunities to dispute if they want to go forward, I’m sure they will.”

Burnett agrees that Ryan’s speech was so dishonest, she, too, was scribbling down lies in real time, but then concludes, “He’s a man who says I care deeply about every single word. I want to do a good job. And he delivered on that. Precise, clear, and passionate.”

Did you get that? Just seconds after the speech, both Blitzer and Burnett already know, without even checking, that Ryan’s speech was completely full of shit, but their takeaway is that he “delivered,” and that he was “precise” and “clear.”

It was a breathtaking acceptance of post-honesty politics, and it came from the exact people who should be fighting that trend, the people whose existence depends on fighting it.

When they did get around to fact-checking the biggest lie in Ryan’s speech, CNN delivered a ruling as mealy-mouthed as Blitzer’s and Burnett’s assessment, calling Ryan’s claim about a closed factory in Janesville, Wisconsin “True, but incomplete.”

Now, anyone who has ever had a parent, or been a parent, knows that if you omit important information that completely changes the meaning of what you’re saying, you don’t get partial credit. If you tell your mom “I did my homework,” but fail to add that you’re referring to last week’s homework, you don’t get a “True, but incomplete,” you get grounded. You are a liar.

Ryan’s speech was rife with such lies, and characterized by accusations against President Obama that are actually things that Ryan did, and did worse. He slams the President for failing to act on the Simpson Bowles deficit commission report, a report that doesn’t actually exist because Ryan voted against it. He displays consciousness of guilt when he refers to the commission that he was a member of as “they.”

Ryan also resurrected the Medicare lie that the Romney campaign has been flogging since he joined the ticket, accusing the President of “funneling” $716 billion out of Medicare, when what he actually did was achieve savings from insurance companies and providers, while giving senior citizens increased benefits under Obamacare. Ryan fails to mention that his budget plan contains the exact same savings, and that he and Romney still plan to make those cuts, while repealing Obamacare, which would reopen the Medicare “doughnut hole” and take benefits like wellness visits away from senior citizens. Romney and Ryan would use those savings to pay for tax cuts, while turning Medicare into a voucher program.

But the lie that’s getting the most attention is the one which CNN gave that “True, but incomplete” grade. In his speech, Ryan said:

My home state voted for President Obama. When he talked about change, many people liked the sound of it, especially in Janesville, where we were about to lose a major factory.

A lot of guys I went to high school with worked at that GM plant. Right there at that plant, candidate Obama said: ‘I believe that if our government is there to support you … this plant will be here for another hundred years.’  That’s what he said in 2008.

Well, as it turned out, that plant didn’t last another year.  It is locked up and empty to this day.  And that’s how it is in so many towns today, where the recovery that was promised is nowhere in sight.

As nearly everyone in the world immediately pointed out, that plant closed in December of 2008, before the President ever took office. CNN, however, grants Ryan a generous April, 2009 date because that’s when the last 57 (out of 2,400) jobs were lost. Any way you look at it, the problem with President Obama’s prediction (in February of 2008) wasn’t that he was wrong about the auto industry, but that he was too right. The auto industry rescue came too late for that plant because the economy was a lot more screwed up than anybody knew.

What’s really beautiful about this lie, though, is what President Obama actually said at that plant, and what Paul Ryan said at around the same time. CNN dug up the passage in question, from then-Sen. Obama’s February 13, 2008, speech at that plant. “I believe that if our government is there to support you, and give you the assistance you need to re-tool and make this transition, that this plant will be here for another hundred years,” Obama said.

In a letter to GM a few months later, Ryan (along with Wisconsin’s two US Senators) requested a meeting with the company to “discuss GM’s plans for the Janesville plant, including the possibility of retooling the plant for different production lines.”

So, not only did President Obama have nothing to do with the closing of the Janesville plant, Paul Ryan actually agreed with him, verbatim, that retooling the plant would save it, and offered his support and assistance, as a member of the government, to acheive that.

Not that it matters, but CNN doesn’t apply its faulty “True, but incomplete” logic even-handedly. Their summation of Ryan’s claim could also apply to the controversial Priorities USA ad featuring former steelworker Joe Soptic, yet despite the fact that everything said in that ad was technically true, CNN claimed it was “full of falsehoods,” and ran segment after segment attacking it.

I say it doesn’t matter because lousy rulings by fact-checkers are an unfortunately common part of the game, at least partially balanced out by the valuable research they do in arriving at stupid conclusions. What matters is journalists like Wolf Blitzer and Erin Burnett can spot so many glaring lies in a speech, and then conclude that that’s not really the story.