CNN Washington Bureau Chief Sam Feist: CNN The Only Network That Didn’t Pick A Side In 2012 Election

CNN Washington Bureau Chief Sam Feist: CNN The Only Network That Didn’t Pick A Side In 2012 Election 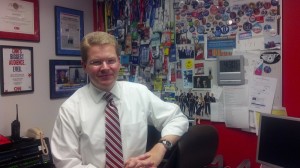 The 2012 presidential election may have ended with more of a whimper than a bang, but the three cable news networks mined the event for big ratings, and each imprinted their coverage with the indelible signatures of their respective brands. At Fox News, Karl Rove led an unsuccessful revolt against the reality of President Obama’s victory in Ohio, while MSNBC mocked them for it. Earlier on Election Day, I spoke with CNN Washington Bureau Chief Sam Feist, who explained how preparation and perspiration helped deliver the night for his network, and cemented their brand, as they see it: the network you can trust.

The 43 year-old Feist was named Washington, DC Bureau Chief last may, after twenty years at the network, and has proven to be one of the more responsive honchos in the cable news business. He agreed to our interview, on very short notice, on the single busiest day of his tenure so far, and spent more than double the time allotted speaking with me. Like other CNN newsmen, Feist’s enthusiasm for news gathering is evident, and sincere.

He began by talking about the network’s preparations for Tuesday’s election, which included the deployment of two dozen reporters to battleground states. “We don’t know where the problems are going to be,” Feist said. “It might be that we crack the code in Ohio tonight by finding out, not just how many provisional ballots are out, but where they’re from. The state doesn’t normally report that, but if we can find that out because we’re on the ground, all the better.”

Feist showed obvious pride as he described how a CNN reporter tracked down a discrepancy in the vote count during the Iowa caucus by getting the actual vote totals from the party chairman of the county in question. In the Colorado primary, CNN similarly sent a reporter to the state party chairman’s office, where they were able to have him read the final results, live on the air. “Meanwhile, over at one of our competitors, think it was Fox,” Sam said, with a laugh, “they saw the tweet, ‘CNN projects the winner, they have the party chair,’ and I think it was Bret Baier who said ‘Producers, can you try to get the Colorado party chair on the phone? He’s got the information.'” 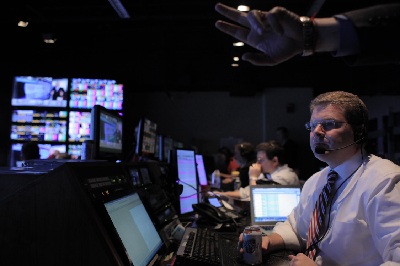 “We learned from that experience that having reporters on the ground on election night can make a huge difference,” he continued. “It is a game of inches. Out of those 24 reporters, it may be that half of them get on for one tiny hit, because their state gets called, and it’s over.”

Feist also said he wasn’t concerned with being the first network to call a state, or the election. “I’m in no rush. I’m not even trying to be first,” he said, “we’re going to be right.”

He then set his sights on the competition. “Our viewers trust us. I believe that our network is the only one that hasn’t picked sides in this election, and I think that, on election night, that means something,” Sam said, adding, “Viewers might expect one of the news channels to lean a certain way,” a veiled shot at MSNBC. “We’re not going to lean, we haven’t picked sides in the election, they have. Even if the others call a race, we’re perfectly happy for viewers to turn to us to find out, for sure, who the winner is.”

As it turned out, CNN was actually last to call the 2012 election, and Feist was apparently right, it didn’t really make a difference. CNN crushed it in the cable news ratings on election night. 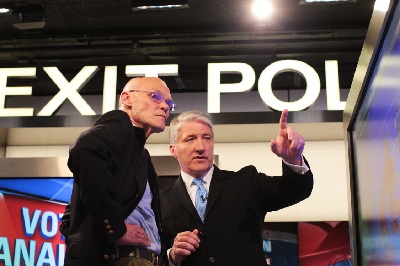 “I have a tradition,” Feist said, holding a medium-thick binder. “Every election year, I read this. It’s the independent report that CNN commissioned in 2000 after all the networks made a bad projection. I read it because I want to understand it, again, and remind myself of what we need to do, and how to do it.”

Although he tries to be diplomatic, there is an unmistakable superiority to Sam’s pride in his network’s down-the-middle brand. “Fox has decided that they want Mitt Romney to win,” he said, “and MSNBC has decided that they want Barack Obama to win, and they make it clear in their story selection, they make it clear with their anchor, and their guests.”

I asked him, “What if reality takes a side?”

He seemed to know exactly what I was talking about. “There are absolute truths, and we should report absolute truths,” he said, and gave, as examples, CNN fact-checks of a Barack Obama ad attacking Mitt Romney on education, and Romney’s famously dishonest welfare ads. The crux of criticism against CNN, however, has to do with the idea that examples such as these are equivalent, that a subjective interpretation of an education ad (that other fact-checkers found to be true) is of equal import to a racially-loaded and completely unfounded attack like the Romney welfare ads. “It’s unfortunate that there are so many dishonest and misleading ads out there, but there are, on both sides,” Feist said, but insisted that there’s no effort to keep the score even to avoid accusations of bias, that they would have done each of those whether the other had existed or not.

Sam also brought up debate moderator Candy Crowley’s on-the-fly fact-check of Mitt Romney on the President’s response to the Sept. 11 attack in Benghazi, Libya. I asked him why Crowley then decided to follow up a cut-and-dried read-back of a transcript by volunteering a more subjective defense of Romney

“You could argue that, in a larger sense, the administration did try to distance itself from the notion that it was a terror attack,” Sam replied. “Her mission , at that point, was to give the audience another opportunity, and say ‘Gentlemen, let’s move on.'”

Sam also defended the sometimes-derided bells and whistles (“gizmos” is how I put it) that CNN introduces into its election coverage. Slightly indignant, Feist said “I don’t think I’d call them gizmos. I believe in using television technology to tell a story, to add editorial information. If you want to call the Magic Wall a gizmo, call it a gizmo. I call it a very useful tool to show the viewers, in a way that nobody else can, what’s happening in a particular county or state.”

The Virtual Senate was an example of CNN tech executed well, with the cool factor of allowing Forman to even rest his hand on a desk that did not exist, and the eat-your-veggies information on the upper chamber that people might otherwise have tuned out for.

Like many old-school journalists, Feist puts CNN’s ratings challenges into perspective. “We believe that, by being distinctive, by actually reporting the news, by being journalists, that it creates a very important role for us,” he said. “CNN is a very successful company, this will probably be our most profitable year in history. The truth is that people pay a premium for CNN because of who are audience is, and what it is that we do. People are proud to be associated with CNN. Advertisers are proud to be associated with CNN. We’re a little bit insulated from (ratings pressure).”

He then pointed at a crude up-and-down bar graph on the white-board behind him. “CNN’s ratings go up and down. People tend to write about CNN’s ratings when it’s down, they never write about it when it’s up, that’s the way it is. You have to look at CNN’s ratings like that, averaged out over a week, a month, a quarter.”

Finally, I asked Sam who his hero in journalism was. Feist recalls a journalism professor of his who introduced him to some books on Edward R. Murrow, and years later, carved a bust of Murrow that now sits in Sam’s garden.”I look at that every day,” he said.

I joked that it sounded like his story was going to end with his hero being Keith Olbermann, and Feist threw in one more critique of his network’s rivals. “Not so much,” he replied. “He’s a perfectly good broadcaster, but in many ways, he led MSNBC down the path to partisan journalism, for better or worse.”