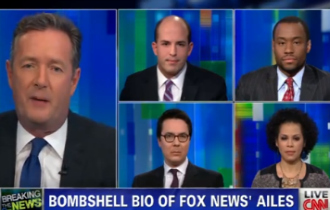 “People who are skeptical of Fox News are going to read this book and are going to be sure, once and for all, that Fox News is an arm of the Republican Party,” CNN media critic noted. However, he said, “If you’re a Fox fan or a fan of Roger Ailes, you’re not going to believe a word of it anyway.”

“You can be totally against everything Fox stands for while appreciating that [Roger Ailes] is some kind of genius,” Morgan added.

Sherman’s book, The Loudest Voice in the Room, is scheduled for release on Jan. 14, and has already been roundly dismissed by Ailes and Fox News, who’ve repeatedly noted that the author and his publisher, Random House, only requested interviews; but no one ever submitted any items to be fact-checked by the network.

When CNN contributor Ryan Lizza stated that there will likely be a “concerted effort” by Fox to discredit Sherman and the book, Marc Lamont Hill disagreed that “I don’t think there’s a certain moral expectation about TV executives, and certainly not about Fox News.”