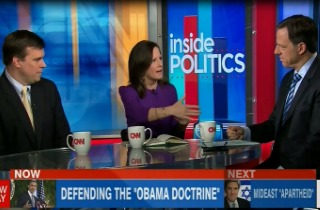 On Monday, a CNN panel dug into recent comments made by President Barack Obama who took on his “critics” over the weekend during a press conference in the Philippines. The president said that his approach to foreign affairs is primarily criticized for not being faster to embrace the use of military force. The panel of CNN experts disagreed, noting that “there’s almost no one right now” who is saying that.

“It’s interesting he would take it out that far, sort of, to deflect criticism,” she continued, “when really the criticism has been that he’s not moved quickly enough on sanctions, and that perhaps that the U.S. should be acting more unilaterally without doing so much negotiation with partners abroad.”

“Maeve has a point,” CNN anchor Jake Tapper agreed. “No one’s saying ‘Boots on the ground.’”

“Politically, it serves him well to keep up this, sort of, anti-Bush pose,” New York Times reporter Jonathan Martin said. “That’s always been the response, ‘Do you want to go back to days of Bush and preemptive war?’”