CNN’s Ali Velshi Blows It On Fact-Check Of President Obama, But Nails Romney 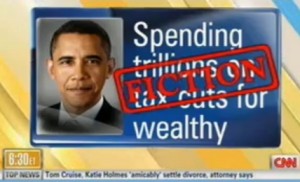 On Tuesday morning’s edition of CNN’s Early Start, Chief Business Correspondent Ali Velshi performed brief fact checks of President Obama and Republican presidential candidate Mitt Romney, on the subject of the current debate over the fate of the Bush tax cuts. While Velshi correctly called Romney out for saying that allowing the Bush tax cuts for the wealthy to expire will hurt small businesses, he blew it when he called one of President Obama‘s claims “fiction.”

President Obama delivered a speech in the East Room of the White House on Monday, “calling on Congress to extend the tax cuts for the 98 percent of Americans who make less than $250,000 for another year.”

Former Massachusetts Governor Mitt Romney, meanwhile, told conservative radio host John Fredericks that “Small businesses are overwhelmingly being taxed not at a corporate rate but at the individual tax rate. So successful small businesses will see their taxes go up dramatically, and that will kill jobs.”

Ali Velshi began his segment by playing a clip from the President’s speech, in which he said “Many members of the other party believe that prosperity comes from the top down, so that if we spend trillions more on tax cuts for the wealthiest Americans, that that will somehow unleash jobs and economic growth.”

“The President is talking about government spending trillions more for tax cuts for the wealthiest Americans,” Velshi said, following the clip. “That’s a little bit of fiction,” he added, explaining that even if the Bush tax cuts for the wealthiest Americans expire, the savings would be $968 billion over ten years, not the “trillions” President Obama referenced in the clip.

The problem is, later in that same speech, the President said “The money we’re spending on these tax cuts for the wealthy is a major driver of our deficit, a major contributor to our deficit, costing us a trillion dollars over the next decade.”

That jibes pretty well with what Velshi said. The “trillions of dollars” in tax cuts for the wealthy that President Obama referenced earlier in the speech were the Bush tax cuts, plus the additional tax cuts in the Paul Ryan budget, which Mitt Romney and Congressional Republicans support. The President’s correct quotation of the Bush tax cut figure, later in the speech, should have been a red flag for Ali.

But Velshi did take on Mitt Romney’s claim, which relies on a rather elastic definition of “small business.”

“Will allowing the Bush tax cuts for wealthy Americans to expire hurt small businesses?” Velshi said. “That’s fiction too. If the President gets his way, and those cuts expire, the vast majority of small businesses in the United States will not be affected. According to Congress’s own Joint Committee on Taxation, just 3% of small business owners would take a hit.”

This is not necessarily a knock on Ali Velshi, even good umpires miss a call from time to time, but segments like this reinforce the common mainstream media obsession with fake balance, with the notion that “both sides do” whatever is at hand. Indeed, if Ali Velshi had rated the President’s claim “true,” which it is, and Romney’s as “fiction,” he would likely have bought himself a huge headache from the “everybody gets a trophy” right-wing watchdogs. That shouldn’t prevent him from issuing a correction.

Here’s the clip, from Early Start: