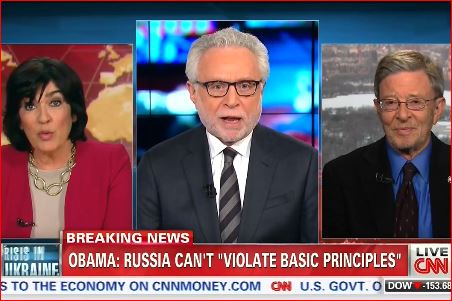 CNN International Correspondent Christiane Amanpour became caught up in a heated exchange with New York University professor Stephen F. Cohen on Monday after he insisted that Russia was provoked by the Ukrainian opposition to invade Ukrainian Crimea.

Amanpour tore into Cohen for insisting that Russian President Vladimir Putin views himself as fulfilling Russia’s historic destiny and was provoked into attacking Ukraine. She insisted that Cohen explain why Russia “trumped up” a crisis regarding the threat posed by the new opposition government or that ethnic Russians were under threat in Crimea.

“All of this is trumped up,” Amanpour insisted.

“The extremism didn’t come from Russia. It was coming from Western Ukraine,” Cohen insisted. “There’s a small but resolute right-wing nationalist movement in Ukraine. its quasi fascist, and its dictating terms to this parliament in Kiev – which is not legitimate in law, international or constitutional.”

But the most surprising part of the segment came when CNN anchor Wolf Blitzer repeated a claim by Russia’s United Nations Amb. Vitaly Churkin that Nazi sympathizers have taken power in Western Ukraine, for the sake of clarifying that there has, in fact, been inflammatory rhetoric coming from Russia. Amanpour pounced on this comment and admonished Blitzer for repeating that charge.

“You’ve got to be really careful putting that across as a fact,” Amanpour said. “Are you saying that the entire pro-European Ukrainians are anti-Semites? That’s what the Russians are saying and that’s what Professor Cohen is saying.” Blitzer did not seem pleased with the lecture.