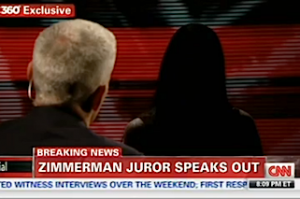 CNN’s Anderson Cooper landed the first “exclusive” interview with one of the six women who sat on the George Zimmerman murder trial jury for the last month. Seated in darkness and identified only as Juror B-37, the woman told Cooper is “seems like it’s been years” since the trial began and shared which moments of the proceedings had the biggest impact on her.

Speaking about the opening statements, the juror called defense attorney Don West‘s knock-knock joke “horrible.” She said, “nobody got it. I didn’t get it until later, and then I thought about it, and I’m like, I guess that could have been funny, but not in the context he told it.” She told Cooper that in general she found the witnesses to be “credible” and said when it came to the 911 call audio of the screams, she believed those who said it was Zimmerman’s voice “because of the evidence that he was the one that had gotten beaten.” All but one of the six jurors agreed with that assessment. “I don’t think there was a doubt,” she said, “that everybody else thought it was George’s voice.”

If there was one witness who the juror didn’t find entirely credible it was Trayvon Martin‘s friend Rachel Jeantel. “I didn’t think it was credible, but I felt sorry for her. She didn’t ask to be in this place. She wanted to go. She didn’t want to be any part of this case. I think she felt inadequate toward everyone because of her education and her communication skills. I just felt sadness for her.” She added, “she was embarrassed by being there, because of her education and her communication skills, that she just wasn’t a good witness.”

Cooper asked the juror specifically about Jeantel’s “creepy-ass cracker” statement that drew wide attention during the trial. She said she thought it was “probably the truth” and that “Trayvon probably said that” but said she didn’t “think it’s really racial. I think it’s just every day life. the type of life that they live, and how they’re living, in the environment that they’re living in.”

Watch part 1 of Cooper’s interview below, via CNN:

In the second part of the interview, the juror told Cooper she thought Zimmerman’s “heart was in the right place” on the night he shot and killed Martin and the only thing he is guilty of is “not using good judgement.” She said she thought he had “every right so carry a gun,” adding, “I think it’s everyone’s right to carry a gun.”

When Cooper asked if the juror thought Zimmerman “really felt his life was in danger” she responded. “I do. I really do.” When he asked if she thought Martin “threw the first punch,” she said, “I think he did.” Despite those assertions she admitted that among she and the other jurors, “nobody knew exactly what happened.”

She reiterated that she did not think race played a role in the case. “I think if there was another person, Spanish, white, Asian, if they came in the same situation where Trayvon was,” she said, “I think George would have reacted the exact same way.” The juror hedged a bit when Cooper asked her whether she would feel comfortable having Zimmerman on “neighborhood watch” in her community saying it would be OK “as long as he didn’t go too far.” She eventually said she thought he’d “learned his lesson” and after the trial “would be more responsible than anyone else on the planet right now.”

Watch part 2 of Cooper’s interview below, via CNN: