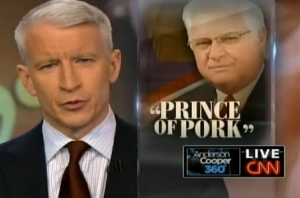 On AC360 Wednesday night, Anderson Cooper had great fun introducing viewers to Rep. Hal Rogers of Kentucky, who gets the “Keeping Them Honest” treatment. Rogers, an incoming Republican committee chairman, will–in Cooper’s words–be the point man deciding “how your tax dollars are spent.”

He’s also, Cooper says, known as “one of the biggest money wasters in Congress.”

What follows is a great example of how much fun it can be to watch Cooper when he’s hitting his stride: using facts to truly “keep them honest” and covering the whole thing with a frosting of humor–including the rare chance to hear Anderson Cooper say the words: “Cheetos? Yes. Cheetahs? No.”

“It’s time to grab a big shovel with a sharp blade to start digging ourselves out of this nearly $14 trillion mess. We’ve got to go line-by-line and take an ax to programs that we simply can’t afford.”

Then, Cooper goes line by line and finds examples of how the “Prince of Pork” has spent money in his own district. “Keeping them honest tonight, Congressman Rogers only seems to talk the talk, not walk the walk, he says,” pointing out Rogers’ 52 earmarks for 2010 adding up to $98.9 million:

“He got a quarter billion dollars in the last two years, including 52 million dollars for a National Center for Hometown Security. It’s located right there in Somerset, Kentucky, which is Congressman Rogers’ hometown. Population? Wait for it–11,000. The local airport’s also gotten earmarks over the years. $17 million even though the last commercial airline? They pulled out in February due to a lack of passengers. It’s right down the road, by the way, from the Hal Rogers Parkway.”

How does this become a conversation about Cheetahs and Cheetos? Watch, from CNN: