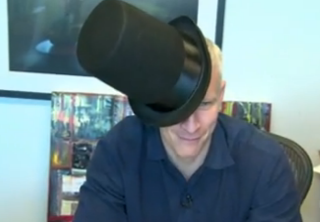 Save for a handful of adorable old ladies, no one cares about Prince What’s-his-name and that chick getting married. But the American media is sending their best and brightest to England to pretend to care next week, and that means etiquette lessons! CNN’s Isha Sesay gave Anderson Cooper a crash course in handling royalty last night and, judging from the results, there’s at least a moderate chance of Cooper causing an international incident.

Yes, Anderson Cooper has braved some of the most dangerous locales on earth– Libya, Egypt, Afghanistan, Iraq, radioactive Japan, et al.– but never has he seems as unprepared for the journalistic battle than on his prep for the foray to London. After getting briefly distracted by some sort of Queen Elizabeth II action figure, Sesay attempts to get Cooper excited about learning how to handle a meeting with Her Majesty. “No fist bumps, no kissing of the cheek, no touching of the shoulder,” Sesay instructed, later noting that, after first reference (when she is to be called “Your Majesty”), the appropriate address to the queen is “Ma’am,” which sounds like “mom,” not “mamm.” “I’m not going to meet the queen,” Cooper said dismissively– and no, he can’t tell the difference between “mom” and “Mamm” either.

Then there’s attire. “Is Piers Morgan wearing one of those morning suits?” he griped. Sesay suggested that morning suits were, in fact, the proper attire. “I’m not going to spend money and buy a morning suit– first of all, I don’t even know what a morning suit is.” Cooper got distracted for a bit by a preposterous top hat he couldn’t stop snarking on (“you didn’t even take the tag off because you’re going to return it and it’s 100% polyester. Wow. CNN went all out”), but returned to the morning suit once again: “Isn’t there an ascot involved?” Reminded that his colleague Roland Martin wears, designs, and advocates ascot-wearing at all times, Cooper lamented that “I’ve spent my life trying to get away from ascots.”

And there you have it: the difference between British royalty and the closest thing America’s got to loyalty, the heir of the nation’s most prestigious family who refused to lounge around on his inherited wealth and instead rose to become one of the most acclaimed journalists in American TV history. Anderson Cooper is basically the reason Americans don’t care about the royal wedding incarnate.

The hilarious segment via CNN below: