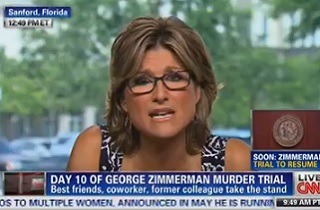 As George Zimmerman‘s defense team produced an endless stream of witnesses who are sure they heard Zimmerman screaming for help on that 911 call, the prosecution has been hammering home the accused murderer’s use of profanity as proof of ill will or hatred toward unarmed slain teenager Trayvon Martin. During a segment about that issue, crucial to establishing a second-degree murder charge, CNN’s Ashleigh Banfield apologized for the network’s decision to censor the language, “because it’s so germane to this argument today.”

Earlier today, the censorship of the George Zimmerman trial became more distracting than usual, as some explicit language was broadcast uncensored, while other portions of the trial, including non-profane questions and answers, were censored by CNN. In discussing the issue of ill will, hatred, or evil intent in Florida’s 2nd degree murder statute, the language used became central, because all of the defense witnesses claimed that the words “assholes” and “fucking punks” are not indications of ill will.

CNN legal analyst Paul Callan argued that “The use of this language wouldn’t prove murder” because “the defense said he killed in self-defense. Self-defense will trump those words.”

As she tossed to a break, Banfield said, “By the way, yes, CNN bleeps out the language, and we are sorry to do so, because it’s so germane to this argument today.”

It was an extremely astute observation that begs the question: Then why are you doing it? And why are you bothering to do it when you’re doing it so poorly? CNN has ignored language standards in the past (also inconsistently) for good reason, and they should do so now.

Unfortunately, because of time constraints I was unable to respond to Ashleigh Banfield’s final observation that Trayvon Martin was not a criminal but a kid with skittles on the night of the killing. I never said that he was a criminal on that night. I said that George Zimmerman thought Trayvon Martin was engaging in criminal activity. I am not alone in this assessment. In fact the prosecution makes the claim that to George Zimmerman, Martin looked like a criminal. They cite Zimmerman’s derogatory “bleeped” words about punks and criminals to support the claim. This is strange because the “criminal profiling” charge hands Zimmerman a self defense claim supported by prosecutors in their own murder indictment. The indictment mirrors Zimmerman’s defense that he was in subjective fear of a person he thought to be a criminal. And since when is it improper or even criminal to use derogatory terminology to describe someone you believe to be engaged in criminal activity…like possibly breaking into your house or that of a neighbor. Are we so politically correct that we are supposed to say only nice things about people we believe to be engaged in criminal activity. Please note this is very different from racial profiling which is always improper. Racial profiling is not charged here. Prosecutors tried to make this a case of racial profiling but the judge threw those claims out citing a lack of evidence. Prosecutors then proceeded with the spurious claim that saying nasty things about people you think to be criminals can support a Murder 2 count if you prove to be mistaken in your assessment as Zimmerman obviously was. In Florida you apparently are not supposed to harbor “ill will, hatred,.”or “spite” against those you believe to be engaged in criminal activity. Yes Zimmerman was mistaken, tragically mistaken in his assessment of Trayvon Martin but the Murder 2 indictment is overcharging and a strategic error by prosecutors. In the end it will help the Zimmerman defense. And words..the exact words used to establish criminal intent are of critical importance in weighing the evidence in a murder prosecution. Had we not reached the end of the show..that would have been my response to my good friend, Ashleigh Banfield. Paul Callan, CNN Legal Analyst and Contributor.