CNN’s Ashleigh Banfield: ‘I’ve Had It’ with Death Threats for My Reporting on Dunn Trial
video

CNN’s Ashleigh Banfield: ‘I’ve Had It’ with Death Threats for My Reporting on Dunn Trial 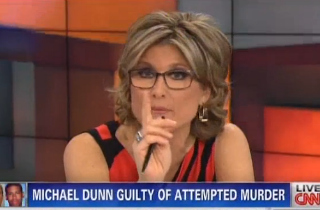 Ashleigh Banfield is not pleased with how Twitter users have treated her as of late. The CNN anchor railed against alleged death threats she and her family have received in response to her coverage of Michael Dunn‘s murder trial.

Dunn, the so-called “loud music” shooter, was convicted Saturday on three counts of second-degree attempted murder, but jurors deadlocked on whether he committed first-degree murder when his bullets struck and killed 17-year-old Jordan Davis.

Some TV anchors and legal analysts like Banfield have suggested race may have played a factor in the jury’s decision, leading to all kinds of criticism on social media. Though Banfield told her panelists on Monday that she intends to feature “all colors” in an upcoming discussion of the Dunn case, she lamented that Twitter has been hateful towards her and other commentators.

“Call it back, folks!” she implored. “Stop threatening to kill people on Twitter because you don’t like what they are saying! That’s the problem: If we can’t communicate, we are never going to know what the problem is. And this is a case that outlines it.”

Her co-panelists agreed that this trial has brought about a need for a longer conversation on “the laws, about race, about sensitivity, about tolerance, about ‘Stand Your Ground.'”

“And you know? No Twitter,” Banfield declared. “I have had it with people who are threatening me, and my kids, and my family over simply commenting on the law and criminal procedure and respecting juries. Because they do work hard. They work way harder than I do; and they work way harder than the rest of those people making those peanut gallery comments.”