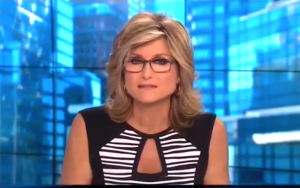 “If you supplant the word ‘Jews’ for ‘Muslims’ in a lot of the rhetoric that we’ve had this morning, I think people would find it sort of cringe-worthy and reminiscent of a really ugly time in our history,” said Banfield.

She then wondered aloud whether or not the reaction would be any different if, per a hypothetical example, border patrol agents began asking those wanting to legally travel into or immigrate in the United States if they were Jews.

“There are no Jews that are coming in here to destroy America,” responded Lord. “They’re coming here to get away from these people.”

Banfield interrupted Lord with a reference to former TSA administrator John Pistole‘s 2004 congressional testimony, in which he cited 18 known terrorist attacks committed by Jews or Jewish-affiliated groups on American soil between 1980 and 1985. All the while, Lord nodded his head in disagreement and tried to get the anchor’s attention.

“What are you talking about?” she exclaimed. “There have been Jewish terrorist attacks. Should we therefore ask no Jews to please apply for a visa?”

That’s when Lord came back at Banfield with a completely out-of-left-field response.

“Are you really saying to me that there’s an international Jewish conspiracy to take over the world?”