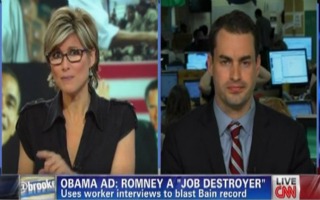 Obama For America Campaign National Press Sec. Ben LaBolt squared off with CNN anchor Ashleigh Banfield on Tuesday in a contentious interview. Banfield took LaBolt to task over several assertions made in the most recent ad that focuses on Mitt Romney’s tenure at Bain and a factory which had its assets sold off and its workers laid off in the early 2000s. What follows was a heated session in which Banfield seemed troubled that she could not get LaBolt to admit the Obama campaign stretched the facts in this latest ad.

RELATED: Obama Ad Blasts Romney: He Was A ‘Job Destroyer’

The interview turned contentious almost immediately, as Banfield took LaBolt on over the ads numerous assertions that were determined to be less-than-factual.

“Mitt Romney has asked us to judge his tenure as a corporate buyout specialist – he’s listed that as his lead qualification for the presidency,” said LaBolt. “We’re not questioning the private equity industry as a whole, we’re questioning Mitt Romney’s economic philosophy. Is that the type of economic philosophy you’d like to see in the Oval Office where Mitt Romney and the wealthiest few profit at the expense of the middle class.”

Banfield cited the Washington Post’s fact checker which gave the ad one out of four “Pinocchio.” She said that the paper was considering giving the Obama team’s ad “two pinnochios.”

Quick note on that last post: While CNN’s Ashleigh Banfield was grilling Obama campaign press secretary Ben La Bolt over the campaign’s latest ad — the anti-Romney, anti-Bain Capital spot — she said the Washington Post gave the ad “one Pinocchio, which is ‘a big fat lie.'”

In fact, the Washington Post’s Fact-Checker defines “one Pinocchio” as “Some shading of the facts. Selective telling of the truth. Some omissions and exaggerations, but no outright falsehoods.”

Bain Capital was clearly involved in the company’s decisions to greatly add to its debt load — decisions that were made while Romney was actively running Bain. That debt load may have contributed to the company’s failure to weather a steep decline in steel prices, but it was not the only factor that led to the company’s bankruptcy filing. The ad fails to make clear that the Kansas City plant was already facing hard times, and Bain Capital’s investment may have represented its best chance for survival.”
…
Romney had left day-to-day management of Bain in February 1999 to help organize the Salt Lake City Olympics. So he was running Bain when GS Industries settled the 1997 strike with workers by promising guarantees on their pensions, but he was not there when the company used the bankruptcy process to break those promises and slash those benefits…The Kansas City plant was closed in February 2001.

So, Banfield was partially right – she was correct that the heart of the Obama team’s ad was factually incorrect and sought to make a link between Romney and this failed plant where a direct connection is tenuous at best. However, she pretty much biffed it on the “Pinocchio” scale… so, I guess we can call it a wash, right?

The point that the Washington Post and Banfield make is that this is ad is somehow an indictment of Bain’s practices and Romney by extension. Even President Obama’s former “car czar” Steve Rattner criticized the intent of the ad on Monday, saying that he thought “the ad is unfair.”

Look, Mitt Romney made a mistake ever talking about the fact that he created 100,000 jobs. Bain Capital’s responsibility was not to create 100,000 jobs or some other number. It was to create profits for its investors, most of whom were pension funds and endowments and foundations. And it did it superbly well, acting within the rules, acting very responsibly, and was a leading firm. And so yeah, I do think to pick out an example of somebody who lost their job, unfortunately, this is part of capitalism, this is part of life, and I don’t think Bain Capital did anything they need to be embarrassed about.

No more damning condemnation needs to be made of the Bain ad. Even those political operatives that would love to indict Bain as a thoughtless engine of capitalist destruction have to say that this ad goes too far.

LaBolt pivoted to Romney’s record as a job creator, which as LaBolt says, WaPo rated as a false claim as well. “Their goal was wealth creation, not job creation,” said LaBolt echoing Rattner’s point rather effectively thought attempting to reach the opposite conclusion.

“The policies he’s proposed today would return to the same budget-busting tax cuts for millionaires and billionaires that benefited a few,” said LaBolt before he was interrupted by Banfield.

“Ben, I don’t want you to campaign on this program, I want you to answer question about the ad,” said Banfield. While LaBolt continued to talk over her, Banfield never lost her congenial demeanor. “You know business is complex,” said Banfield. She went on to outline how the plant that was the focus of this ad was already failing when they brought Bain to delay that failure.

“Oh, you highlighted this one plant, Ben,” replied a curt Banfield, her joviality beginning to melt away as the frustration associated with pounding the sand that is interviewing a campaign spokesperson began to wear on her. “You and your campaign highlighted this plant and those workers were from this plant.”

“The company failed,” said LaBolt. “750 workers lost their jobs. And ultimately, [Romney and his Bain partners] walked away with millions for themselves after this company failed. It’s not on that premise that we can build our economy.”

It’s hard to argue with a campaign advocate. I don’t begrudge LaBolt his position. Banfield appeared vexed that she could not get LaBolt to admit his employer’s folly in this ad, but she did a good job of maintaining her trademark likeability while taking the Obama campaign to task. Here’s hoping we see more of this in the weeks and months to come.

Watch the heated exchange below via CNN: