CNN’s Ashleigh Banfield: Would Steve Jobs Have Allowed Apple Sweatshops To Go On? ‘Did He Not Care?’ 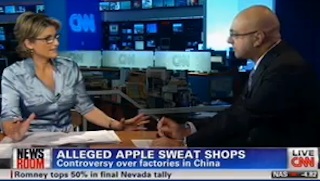 In the wake of a new report out over alleged Apple sweatshops in China, CNN’s Ashleigh Banfield spoke with chief business correspondent Ali Velshi about what Apple knew and when they knew it. “Steve Jobs — he seems like the kind of guy who never, when he was alive, would have allowed any of this to go on,” Banfield observed. “Did he know? Did he not know? Did he not care? Do we know?”

“The question is this,” Velshi responded. “We all know that if you get much cheaper labor in China they don’t work in the same conditions we work in. The issue is how bad is it? There are some things called core violations: employing underaged students, unhealthy conditions. A couple of Foxconn factories within a number of months last year had two explosions caused by the aluminum dust when they brushed the iPads and iPhones. There are some violations that are worse than others and the question is how serious are the violations and in the interest of profitability, do the companies sort of turn a blind eye to it? There are people who say we told Apple what was going on.”

“We told Apple or we told someone at a low level?” Banfield questioned. “They didn’t get it?”

“No, there are allegations from human watchdog groups that said they told Apple,” Velshi explained. “One woman went to Apple headquarters and asked to speak to someone and no one would speak to her. We’re not expecting the Chinese workers would have the same conditions today that US factory workers have, but are they being caused to work six or seven days a week standing, without ventilation. Your iPod or your iPhone gets polished to a great degree. That glass has to be shined.”