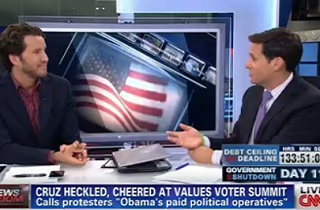 As we reported earlier, Senator Ted Cruz joked, at the 2013 Values Voter Summit, that he might be abducted and disappeared when he goes to the White House this afternoon for a meeting with President Obama. On CNN Newsroom, anchor John Berman made the observation that the joke was ironic because “last person in the world the White House wants to disappear right now is Ted Cruz. One could argue he’s doing the White House a lot of good right now,” which elicited agreement from conservative commentator Will Cain.

Toward the end of his Values Voter Summit speech, Cruz told the crowd that “this afternoon, President Obama has invited the Senate Republicans to the White House,” and added, “So after leaving here, I’m going to be going to the White House. I will make a request, if I’m never seen again, please send a search and rescue team.”

After pausing for laughter, Cruz added, “I very much hope tomorrow morning I don’t wake up amidst the Syrian rebels,” then responded to an audience member by saying “But listen, that’s true, they’ll talk to us, unlike this administration, you’re exactly right.”

Cruz also urged Republicans to continue the shutdown fight. “None of us know what’s going to happen on this Obamacare fight right now,” he said. “In my view, the House of Representatives needs to keep doing what it’s been doing, which is standing strong.”

Following Cruz’s speech, CNN anchor John Berman told Will Cain that Cruz “made quite a joke, really genuinely funny joke,” but added “It’s somewhat ironic, though, because you could make the case, the last person in the world the White House wants to disappear right now is Ted Cruz. One could argue he’s doing the White House a lot of good right now.”

“If that NBC poll is really definitive,” Cain replied, referencing the NBC News/Wall Street Journal poll that’s reportedly rocking Capitol Hill, “and you suggest that his positions are responsible for that, yeah, those hecklers should get and out let him continue his influence.”

Cain added that “I agree with Cruz. I want him to accomplish his goals. But it all hinged on one thing. This is what separated Ted Cruz from Paul Ryan. Not their conservatism, but rather could he swing five senators? Could you force President Obama to decrease his own bill? And the only way to do that was to get the American public so on your side that they had to respond. It doesn’t seem to be going well.”

The shutdown strategy that Sen. Cruz pushed, and is still pushing, has resulted in a raft of polls that have shifted public opinion, and perhaps the electoral winds, against Republicans.