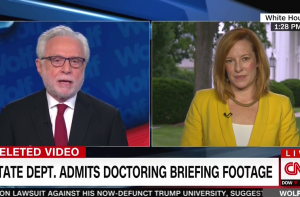 Psaki was on to discuss the recent State Department investigation finding that under her tenure, a briefing video was edited to delete a potentially damaging exchange with Fox’s James Rosen. “I have absolutely nothing to hide here, Wolf, but I will say again, I had no involvement and no knowledge here,” she said.

While denying any knowledge of the edit, she did defend the notion that sometimes diplomacy means the government has to keep information from the press. “I think this is raising an interesting debate you probably had on your show before and we’ve all discussed many times over the years, which is whether diplomacy should be given the room to develop and to grow with the secrecy that’s sometimes needed.”

Blitzer wasn’t quite buying it. “It’s one thing to be discreet and not release all the information to the public for sensitive reasons…” he said. “But it’s another thing to flat out lie to the news media and the American public.”

He called out in particular former State Department spokeswoman Victoria Nuland for lying to reporters about back-channel negotiations with Iran when it was still run by hardliner Mahmoud Ahmadinejad. “…She was asked back in 2013 whether or not there were secret bilateral government to government negotiations going on with Iran, and she said no.”

“That was a lie, right?” Blitzer asked bluntly.

“Well, Wolf, I think you’d have to speak to my predecessor about that,” Psaki responded. She noted that she served at a time when the negotiations with Iran were no longer secret and she could speak openly about them. “My role was providing information… it was at the time where we could do that because of where the diplomatic negotiations were.”

Blitzer then played for Psaki the clip that got the entire controversy rolling, in which Psaki responded to a question about whether or not it was State Department policy to lie to reporters by saying that “there are times where diplomacy needs privacy in order to progress.”

“The accusation against you Jen, and I want to give you a chance to respond, you were defending that earlier lie from Victoria Nuland,” he said.

Again, Psaki demurred, saying he would have to ask Nuland. “I do believe, as I said during that exchange, there are certainly times where negotiations and important diplomatic discussions require not briefing the public on what’s happening.”

That led Blitzer to return to his earlier point. “It’s one thing not to release all of the information you need for national security reasons or diplomacy or whatever. It’s another thing to actually lie to the media and the American public as a result of that,” he reiterated.

“Is it ever justified for a U.S. government spokesperson to lie to the American people?” he finally pressed.

“I think that’s a fundamental value that I have always followed, is not to,” Psaki replied.