CNN’s Bolduan Questions Obama on Paid Family Leave: ‘Is This All Politics?’
VIDEO

CNN’s Bolduan Questions Obama on Paid Family Leave: ‘Is This All Politics?’ 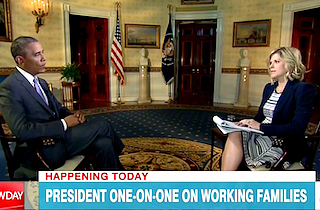 “The goal on Monday is to lift up a conversation that everybody is already having individually and letting people know you’re not alone out here,” Obama said. “What we want to do is to lift up best practices, show that for companies who are offering paid family leave, who are offering flexibility, their workers are more productive, more loyal, there’s lower turnover, and ultimately they’ll be more profitable.”

CNN host Kate Bolduan, an expectant mother herself, pointed out that the GOP will accuse Obama of exploiting women for midterm gains. “It’s no secret that the Democrats’ midterm election strategy is to pitch to women, to get the women to come out to vote,” she said. “Is this all politics?”

“This is personal for me, and I think this is personal for a lot of people,” Obama said. “This is not just a women’s issue. This is a middle class issue and an American issue. I’d welcome a bipartisan effort with ideas coming from the private sector and from Republicans and Democrats and non-profits and the faith community about how we make sure we’re supporting families and reducing their stress.”