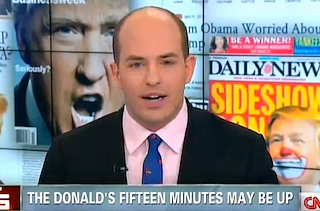 Reliable Sources host Brian Stelter led a discussion Sunday morning on why Donald Trump gets so much coverage from the political media, why he seems to covet it so, and whether his ride might finally be up as he floats another potential campaign bid, this time for governor of New York.*

The discussion was prompted by a critical profile by BuzzFeed’s McKay Coppins last week calling Trump’s decades of pseudo-campaigns a “long con.” The article sent Trump into a Twitter rage — and got the aide who suggested the profile fired — which Coppins said confirmed his thesis that Trump is a fundamentally unserious figure.

“What is it that makes this billionaire who’s already famous, already rich, obsessed with getting the political class to take him seriously?” Coppins said, explaining the drive behind his piece. “My conclusion was at the end of the day, he’s already done real estate, he’s already done reality TV, he has fame. What he wants is credibility. What he wants is for at least some segment of the population to look at him as a serious person. The great tragedy for him is that he doesn’t know how to do that.”

“He is a tremendous manipulator of the media, he always has been,” POLITICO’s Maggie Haberman said. “And I don’t say manipulator as a pejorative. He is someone who really knows how to work it…People do want to read about Trump. That doesn’t mean that they’re gonna to vote for him. But people do want to read about him, or McKay would not be writing about him, and Twitter would not be blowing up with tweets about how irrelevant he is.”

“The key distinction is he thinks this somehow gets him credibility,” Coppins replied. “The fact is, everybody pointing and laughing at him does not make him a more credible figure.”

* Stelter was careful to include his own network, CNN, in the list of outlets that sometimes over-cover “the Donald.”