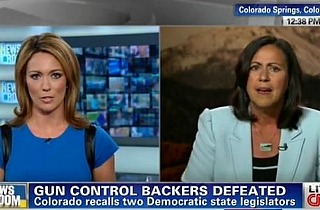 Colorado state Sen. Angela Giron (D-Pueblo) joined CNN’s Brooke Baldwin on Thursday to discuss the Tuesday recall election which resulted in her ouster due to her support of strict new gun laws. She said that the only reason why she lost her recall challenge to a Republican plumber was a concerted GOP campaign of “voter suppression.”

“We know what really happened here,” Giron said. “What this story really is about, it’s about voter suppression.”

“When Colorado has voted by mail — 70% of Coloradans vote by mail — and we didn’t have access to that mail ballot,” she said before Baldwin cut her off.

“Let’s just not go there,” Baldwin interjected. “Let’s get to the meat of the story.”

“That is the meat of the story,” Giron insisted.

Baldwin said that Giron’s campaign was backed by well-funded anti-gun groups but still lost. “What happened?” she asked.

She later insisted that the “results would have been different” if mail-in ballots had been allowed in this recall election.