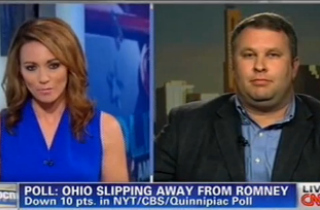 It’s going to take more than polls to convince Ohio Republican Party Executive Director Matt Borges that conservative presidential candidate Mitt Romney is unfavorable in the key swing state, as the former lobbyist quarreled with CNN’s Brooke Baldwin Wednesday afternoon over the accuracy of a new NYT/CBS News/Quinnipiac poll that shows Romney falling behind in the state.

“I hope the Democrats believe it, I know I don’t,” Borges said of the poll’s results. “This election is going to come down to turnout. The turnout models that are being used…actually in some cases show that turnout will be better for Barack Obama in 2012 than it was in 2008. I don’t know what universe these people are living in and believing that’s going to happen this time around. We’ve got an incredible operation led by the Romney team here in Ohio and the RNC’s victory program taking our message directly to voters.”

Borges continued: “We know this is going to come down to turnout. We can’t be distracted by these polls because at the end of the day, they aren’t accurate.”

This prompted Baldwin to step in and tell Borges: “Hang on, I just have to interrupt you, and I know there are polls and all kinds of numbers day in and day out. But we’re talking New York Times, Quinnipiac University, and CBS News. Are you saying their numbers were wrong?”

Borges chalked it up to their samples: “In one instance they were looking at a plus ten [in] Democratic turnout, in terms of the numbers of Democrats that would turn out over the numbers of Republicans. That’s the sample that they used to come up with the polling that they’ve made public. Of course, in 2008 there was a plus eight and so they’re assuming a 25 percent increase in Democratic turnout…What we’re looking at is a race that’s very close and a race that’s going to come down to who turns out their voters more effectively.”

Switching gears, Baldwin said, “I don’t want to argue polls with you, I mean they are pretty specific though if you look: economy, healthcare, national security, women’s reproductive health issues, etc. I’m going to chuck the poll. Here’s my question to you then Matt because this is our own reporting. This is from CNN’s Peter Hamby, who has a pretty stunning piece on our website in which he talks with Ohio Republicans about Mitt Romney and they say basically that Mitt Romney is on the wrong side of the auto bailout, that of course hurts him in Ohio. They say he’s not taking advice from people on the ground and they quite frankly say he’s not making a case to be elected.”

Baldwin went on to share a quote from a statewide Republican officeholder who told Hamby:

“Why is Mitt Romney running for president and what will his presidency be about? I don’t think most Republicans in Ohio can answer that question. He has not made a compelling case for his candidacy. Don’t make your campaign about marginal tax rates. Make it about your children and your grandchildren and the future of this country.”

On whether he’s hearing this kind of message of desperation in Ohio, Borges said, “I can tell you that there’s absolute unanimity that this president needs to be defeated.”