CNN’s Brooke Baldwin Takes Tony Perkins To The Woodshed: ‘Why Do Homosexuals Bother You So Much?’ 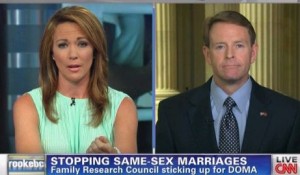 Tony Perkins has been particularly loud in recent days as a voice against equal rights of marriage for same-sex couples, arguing that one minority in the society cannot define religious sacraments that, for some reason, are also governmental institutions “for the rest of us.” He took his crusade to CNN today with anchor Brooke Baldwin, who flummoxed the Family Research Council leader with simple questions like “have you ever been to the home of a same-sex couple?” and “why do homosexuals bother you so much?”

From the start of the interview, it was clear that Perkins was not interested in discussing the matter in personal terms, instead noting that “30 states have enshrined that definition into their constitution with an average vote of 67%,” and the issue at hand was not the private lives of loving couples, but “what we’re talking about here is the curriculum in our public schools.” Baldwin didn’t seem to buy into this argument, asking, “why are we talking about curriculum in the school when this is about love and the law and the ability to get married?” Perkins replied that the subject was one in the same: “religious freedom, parental rights, public accommodation.”

Baldwin asked him to clarify what about same-sex couples deserved to be “less valued” by society. Perkins noted that he did not discount that there were loving same-sex couples raising children, just as there were loving single mothers doing the same. “If it were just two caregivers, three would be better!” he noted, but instead it was about a “fundamental role” a man and a woman had in a family. Baldwin asked him whether his experience had corroborated that belief: “Have you ever been to the home of a same-sex couple?”

Perkins answered in the negative, and refused to argue what he would tell that hypothetical couple to convince them their lifestyle was hurting society. “We don’t make public policy based on what is good for me… not anecdotes or what one couple likes.” As a society, Perkins asserted, “we have incurred a great harm.”

“I know you don’t want to answer the question,” Baldwin asked, patience wearing visibly thin, “but I’m going to try again: why do homosexuals bother you so much?” “They don’t bother me!” Perkins replied, asserting again that he was “not going to be silent while they try to redefine marriage in this country.”