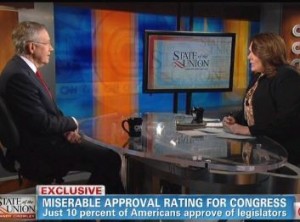 Senate Majority Leader Harry Reid appeared on CNN’s State of the Union earlier today, and one of the discussion topics was the abysmal approval ratings of Congress. No one likes Congress. Hell, even Reid admitted he’s not a big fan. But he squarely placed the blame of Congressional awfulness on the Republican party for blocking everything. Candy Crowley challenged Reid on this, and asked him how the Democrats could have done nothing to contribute to it.

Crowley asked Reid if the low approval numbers meant the Democrats might end up losing their Senate majority this November. Reid admitted he places himself in the majority, saying that Congress currently “looks bad” and the biggest problem has been obstructionism from the Republicans. As Reid was starting to go off on the other party, Crowley asked him if it was really all their fault. Channeling the lessons this nation once learned from its great leader Barney the Dinosaur, Reid asked, “Why does everything have to be a fight? There shouldn’t be a fight, we should be able to get things done.”

Reid touted the strong candidates Democrats have been putting up all over the country, even in strong Republican states. A little later on in the program, Crowley returned to Reid’s assertion that the Republicans are to blame for the low approval ratings of Congress. She asked Reid, “is there nothing that the Democrats are doing to add to this?” Reid continued to point to unprecedented levels of obstructionism on the most “mundane” matters.