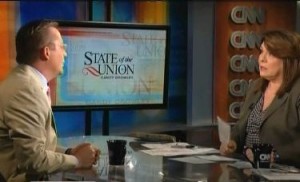 On CNN’s State of the Union today, Candy Crowley grilled Obama campaign advisor and former White House Press Secretary Robert Gibbs on a recent attack ad released hitting Mitt Romney for outsourcing. Crowley ran the ad, pointing out that The Washington Post rated it false (“four Pinocchios”), and challenged Gibbs to explain why this is still being used as a line of attack against Romney.

Crowley also cited a more recent ad where the Obama campaign cites a Washington Post article on the claim that Romney outsourced jobs when he was at Bain Capital. For its part, the Post did examine the validity of that particular claim, but because of the conflict of interest, they did not officially rate the veracity of the newer ad.

When Gibbs tried to argue the point, Crowley countered by saying that Romney was not in charge of Bain at the time of said outsourcing, and thus his ties to it are not as direct as the ad otherwise suggests. Gibbs continued to push the outsourcing line of attack, and even brought up the recent revelation that Romney keeps money in a Swiss bank account. Crowley asked if Gibbs was implying Romney’s offshore money was illegal. Gibbs answered with, “We don’t know!” He called on Romney to release all of his tax returns for the past few years.

Crowley went back to grilling Gibbs on the misleading ad, and Gibbs responded by deferring to The Washington Post‘s report that the ad is based off of.