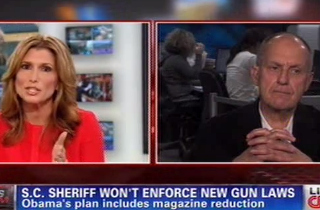 This morning on CNN, anchor Carol Costello went head-to-head with Charleston County Sheriff Al Cannon over his declaration of refusal to enforce any new federal gun laws he deems unconstitutional.

The sheriff began the segment by characterizing Sen. Dianne Feinstein’s “assault weapons ban” proposal as “scary, very scary,” explaining that her goal to dry up the supply of particular firearms is “a slippery slope.” He elaborated that the Constitution and the Federalist Papers both emphasize “an armed society” as the “final failsafe” from oppressive government. “I believe that there is a goal to ultimately take as many firearms as possible,” he added.

The sheriff later declared himself an expert on the matter of firearms, suggesting that “much of [the push for gun laws] is taking advantage of our grief and people’s general lack of information and understanding about firearms in general.”

Costello pushed back: “But here’s the thing. As a law enforcement officer, you, sir, are responsible for enforcing the laws, not determining if they are constitutional.”

“But you’re also in charge of enforcing the laws on the books,” Costello replied.

“Then I will probably follow it, yes,” the sheriff replied, “but I will look closely at my own understanding of the constitution, my own study, and will put that in the context of what he and others say.”

“Well, you seem to be contradicting yourself when you say that,” the anchor remarked.

Cannon then compared his obligation to enforce constitutional laws to how individual military personnel must obey orders but are not responsible for following orders they deem unlawful. “I don’t believe many generals would really actually agree with you because they want the soldiers to follow their orders,” an incredulous Costello said.

“I have a military background,” the sheriff replied. “You’re also obligated not to follow an unlawful order. They will tell you that. Any general that you talk to will tell you.”

“Any general would say ‘I don’t issue unlawful orders,’ at least i hope not,” she answered.