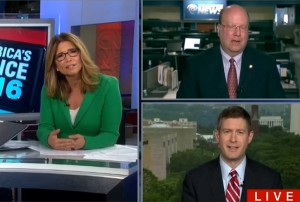 As presumptive Republican presidential nominee Donald Trump tries to slur his way out of the Trump “University” scandal, his surrogates are having a bad day on another front. New York State Assemblyman and Trump backer Bill Nojay took to the CNN three-box Thursday morning to stump for the real estate magnate ahead of Hillary Clinton‘s national security speech, which figures to take aim at Trump’s ideas.

Unfortunately for Nojay, he ran smack into Carol Costello, who doggedly pursued Nojay for a Trump plan beyond “bomb(ing) the shit out of them”:

Costello: Bill, let me ask you something about Mr. Trump’s policy when it comes to defeating ISIS. he says he wants to bomb the out of them. that’s one of his strategies. he doesn’t necessarily want to send large numbers of troops there. what exactly is mr. trump’s plan to defeat ISIS?

Nojay: Well, I think you start with the notion that when you get to tactical military operations, ask the military men. This president —

Costello: But he said he knows more than the generals.

Nojay: Well, if you listen to what the generals are saying and what the troops on the ground are saying, they oppose Barack Obama’s withdrawal from Iraq. In Libya in 2008 when I was there, you had —

Nojay: Carol, ISIS wants to create a caliphate stretching from Tunisia and Libya all across North Africa throughout the Middle East. That’s what we’re really dealing with here.

Nojay: We’re first going to listen to our military commanders on the ground and take their advice unlike Hillary Clinton and Barack Obama, who didn’t do what their commanders asked them to do, and, in fact, withdrew American troops creating the crisis that we have today.

It went on like that for a good long time, with Nojay completely unable to articulate a plan beyond listening to unidentified generals whom Trump is smarter than, and Costello pursuing him like he was Doctor Richard Kimball.

Hillary’s speech creates a huge opportunity to knock some of the wind out of Trump’s campaign now that he’s facing a general electorate instead of a more conservative Republican primary base, but only if she can do more than point out what’s wrong with Trump.