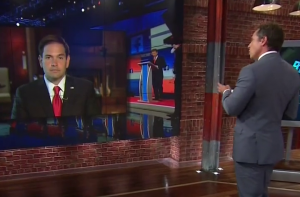 Cuomo asked Rubio about the issue of “reproductive rights in the form of abortion,” and challenged his statement during the Thursday night’s debate that he didn’t support exceptions for rape and incest. Cuomo pointed out that Rubio had in fact sponsored bills with those carve-outs. “So it seems that you had your own record wrong.”

“But it included the exception,” Cuomo pointed out.

Cuomo pressed on, saying that Rubio’s stance “seems very backwards-looking today” and that “cultural mores in the country, certainly the opinions of women, are not in step with what you’re saying right now. You’re comfortable about that?”

“The value of life is timeless,” Rubio said. “The idea that a human life is worthy of the protection of our laws is not something that over time anybody should evolve on.”

But that, of course, sparked a lengthy debate on when life begins, with both men talking over and past each other. “Science has not decided its at conception!” Cuomo yelled, while Rubio responded “Absolutely it has!”