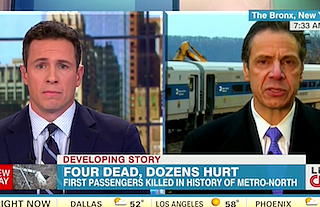 New York Governor Andrew Cuomo appeared on CNN’s New Day to discuss yesterday’s Metro North train derailment that left four dead and almost 70 injured—and spoke to his brother, host Chris Cuomo about the rescue efforts, the investigation into the cause, and the project to get the train line back up by the end of the week.

Governor Cuomo detailed the challenge of removing the overturned cars from the area, and said he had no concerns about the safety of the track.

“[NTSB] said there were three options,” Governor Cuomo said. “Number one, it was a problem with the track; number two, equipment error, this rumor that the brakes on the train didn’t work; or, number three, is just an operator error. At this point on the track, there’s a turn. It’s a sharp turn, but it’s not just about the turn. The turn has been here for decades. Trains negotiate the turn all day. So it’s not about the turn. Something else had to happen. We want to find out what it is.”

The governor added that the information from the black boxes was accessible, and would help to narrow the cause of the crash.

“If there is any good news in this situation, it’s that it was on a Sunday, it was on an early train, there are about 100 to 150 people on the train,” Governor Cuomo said. “If it had been a Monday morning, if it had been during the workweek, you would have had multiples of that number on the train. My guess is you would have had multiples in terms of casualties and death. To the extent you can say it could have been worse, that’s the way it could have been worse.”

“But to lose four New Yorkers during the holiday season, these are four people who left for work in the morning, they were going to the city to enjoy New York City for the day and they just don’t come home again. So the tragedy of it and the pain of it—all New Yorkers should remember the people we lost and the families who are truly suffering today because of this situation.”