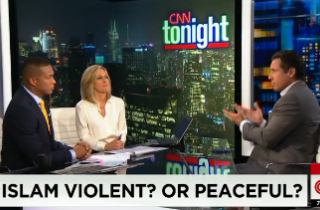 On Sept. 29, Aslan appeared on CNN Tonight and slammed Bill Maher for his comments on the Islamic faith, while also scolding Lemon and Camerota for what he felt was an “over-generalization” of 1.5 billion Muslim people as promoting violence.

“This is the problem,” he said Monday night. “These conversations that we’re having aren’t really being had in any kind of legitimate way. We’re not talking about women in the Muslim world, we’re using two or three examples to justify a generalization. That’s actually the definition of bigotry.”

Reacting to that segment Thursday on CNN Tonight, Cuomo defended his colleagues for asking the right questions about whether Islam promotes violence, and suggested that journalists should do a better job making a distinction between the religion itself and the radicalized individuals.

He emphasized that the Islamic faith is no more inherently violent than other religions, but that some abuse the texts for murderous purposes.

Nevertheless, Cuomo argued, Aslan’s “tone was angry,” and so he “wound up kind of demonstrating what people are fearful about when they think of the faith in the first place, which is the hostility of it.”

This is the state of play in journalism today. The Muslim world is responsible for a really big part of religious extremism right now. And they are unusually violent. They’re unusually barbaric in the places where it is happening. And it’s happening there more there than it is in other places. Do you therefore want to generalize? Of course not. But you do want to call a situation what it is. It’s not a coincidence that ISIS begins with an I. I mean, that’s what’s going on in that part of the world. Doesn’t mean other faiths can’t be violent and other cultures can’t be violent, but you shouldn’t be afraid of the question.

Watch the video, via CNN: